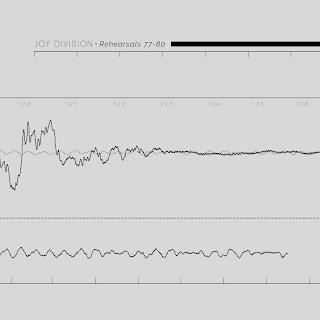 I've had my Porridge this morning,fortified with red fruits and walnuts,soon to change to Gruel after all the supermarket shelves have been cleared by panicing idiots.Even the Vegan section is nearly empty,so that puts the scale of the hysteria in perspective somewhat.So,I suppose,this is still part of the Genesis P-Orridge memorial posts wot i've been doing with a notable lack of a brown nose.
As was mooted in the comments section on either one of the Industrial Philips (Sanderson and Johnson) posts,it was suggested that the fantasy industrial pairing of Ian Curtis and Mr P-Orridge may have resulted in some actual tapes of said encounter. This doesn't appear to bare any weight,unless it was done over the telephone or through the classic DIY avenue of the  mail service,
Apart from the odd gig where Joy Division supported Throbbing Gristle, there was hardly a chance to be in the same town as each other never mind the same room before Ian asphyxiated himself with the assistance of the the laundry rack in his Macclesfield hovel.
Upon meeting, Curtis would obviously have indulged Genesis with some standard Fan sychophancy,which GPO would have lapped up,flattered that the singer of the hottest group in town thought he was good. This usually leads to a mutual masturbation session,including the tiresome drunken cliché of suggesting that  "We really must get a band together".Just like the friends you make on holiday who you never see again after agreeing to "Keep in touch!".
The only information we have on this relationship comes from Genesis P.,as the other principle witness died twenty years previously. Aparently, according to our TG frontman/person, Curtis used to phone him up while at a low ebb,.....cue some classic Marilyn Monroe Syndrome,where the receiver of the phone call indulges in the 'I could have saved him' scenario.This is pure narcissism of course,and very common in suicide cases for even total strangers to believe they hold the answer in their healing hands,which is Christlike behaviour often displayed in the brain function of Psychopaths. Also there is nobody there who can possibly contradict these statements,so ones cover is safe this side of the grave.
Gen also makes reference to his fantasy that Curtis wanted to leave Joy Division and set up with him?
Highly tenuous?......Throbbing Joy?
So,that is the reason.....do we really need a reason?....that I've resorted to Joy Division's Rehearsal tapes to entertain myself, and hopefully you lot,on this bleak sunday morning.The sun is shining but it feel like there's a blizzard blowing outside.....not that i'm allowed outside without my signed and dated form plus proof of ID.(ps if you're reading this in years to come,it was the Covid 19 pandemic thing that I refer to!).
Yes I love Joy Division,and contrarily to their reputation of being a bunch of miserable manc bastards, this is cheering me up somewhat.
It's also a very interesting insight into Joy Division at work.
The main items of interest are,of course, the several versions of "In A Lonely Place",which ,along with "Ceremony" was never captured in a studio with Martin Hannett at the controls. These two tracks would undoubtedly have been the next single, and number one with a bullet.
Again the rapid evolution of the Joy Division sound is very evident(the first 12 tracks are really 'Warsaw rather than JD),as is the perception of the incredibly short time the JD we know were around for......only about 6 or 7 months max, then he left us at the top of his game, never to have their reputation tarnished, forever,although New Order have tried ceaselessly to ruin it.(The Movement album was great however?)
And ,No, no-one could have stopped it happening.....not even Genesis P-Orridge!?

DOWNLOAD  this down load HERE!
Posted by Jonny Zchivago at 11:20

Hi! I discovered this amazing blog last night and I found a lot of interesting material. Greetings from apocalyptic Italy!

Excellent. Thx so much for this and everything u post

Excellent - even though I must admit that I was hoping for some more Philip Johnson. Getting really into those albums. How about some more tapes? Anyway, this is the best blog - many thanks!
Best wishes from Munich,
Sven

Good piece of writing on the Curtis/P-Orridge "relationship", gave me a chuckle. From what I recall, their phonecalls would also feature Ian singing TG's Weeping down the phone, which must've stroked the old Cosey-abuser's ego even more. If it's even true, of course. Going back to read Wreckers Of Civilisation after reading Cosey's autobiography is an interesting experience: the supposed "authority" of the official version of events is completely demolished.

Not to forget I.C. Water by Psychic TV, the "poetic" stream of eulogizing "my old friend, that I could've saved" (like you wrote above). I think I listened to that whole LP (Infinite Beat) once; it's one of the most comically ineptly produced albums ever made. Fred Gianelli does seem like a good bloke though, and can be hilarious on his social media - absolutely no love lost between him and Gen, he's always keen to point out that the 'attempted murder of Cosey by concrete block' story is 100% true, Monte Cazazza was there and has attested to it.

@ anonymous...i assume you have clicked on the link for philip Johnson?..there are more on this blog if you search it.

@ Alan Burns....indeed...its getting to the point where you find out all your childhood heroes are total fucking arseholes.....but then again maybe its us who are the arseholes,or.more likely both? The blow that Gary Gitter was an unapologetic kiddie fiddler hit me hard, even more than finding out that john Rotten took drugs and had sex!!?...were these fuckers taking the piss or what...turns out that they really were taking the fucking piss...out of us!? Sadly Porridge is now in that category,but Glitter made weirder music.,.., as for john lie-don, please stay off of social media you dick!

Something to listen to whilst the world coughs.
Thanks Jonny.

Thank you. I was looking for this under the Misplaced title but this looks like the same release. Always appreciated.