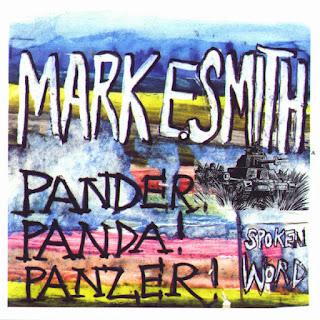 A spoken word album of self-penned,like who else is gonna write stuff like this(?) short stories, lyrics, poetry, keyboard and sound effects, and some fragments of Fall songs,mixed as one continuous track......that's the bleeding obvious stuff out of the way.
Our Mark E. Mark only made two solo albums of using,primarily, the power of the spoken word. This forty minute collage is the last one he was to make.I kinds prefer this to virtually any Fall thing from 1991 onwards.
He does in fact mention the great Jimmy Bloomfield,manager of the 1970's version of Leicester City FC, which is a rare thing indeed.
He's a unique combination of comedian and poet,and its a joy to hear him relaxed and enunciating his words almost like it was 1982 again,rather than the slurring pisshead he sadly became.Here he sounds like the kind of popular dinner guest and raconteur that can make your cheese and charcuterie soirée swing.

Blessings and thanks for the MES posts. As an American (minus much of the regrettable baggage that identification carries), I freely admit that though I love MES it is impossible for me to genuinely understand him. He is/was simply, utterly and decidedly too English for me to be able to truly "get" him (for lack of a better term at the moment).

And more than simply his umbrella Englishness, he is/was likely indelibly representative of the precise flavor of Englishness from his home locale. All of which is to say I love what the guy does/did under his own name or as perennial driver of whatever compilation of members comprised the Fall during any 15-minute period, though I will never appreciate him to anywhere near a degree an English person can. So I feel a bit of an imposter. Peeking into something I love for myriad reasons though it ain't in my blood.

Not sure why the long-winded expose. Guilt relief perhaps. Thanks for the posts Jonny.

It's called Nadsat I think. Not English.