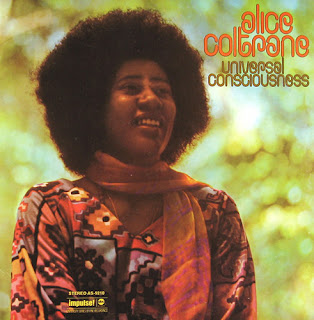 It's 1971, and Turiyasangitananda,otherwise know as Alice Coltrane, has embraced the 'fro' and has read about how everything is connected by a universal consciousness and she wants to tell us about it.

Thanks Alice, but keep it to yourself will ya?
However,if whatever mumbo-jumbo inspires such swirling,tinkling delights as the music on this album,then bring it on.It almost makes one wanna write ones own made up belief system dunnit?
This is great, unique music that, to my knowledge has never been copied.Which is a rare thing on this plagarised planet. Sadly, that is also evidence for a lack of universal consciousness,or is it?
Everyone seems to like the same thing,or things,and stick to like-minded persons in flocks so maybe we are all connected after all?
The very thought that my consciousness is connected to fellow sentient beings like Donald Trump or Tommy Robinson makes me wanna eat this record and wash it down with Nigel Farages Piss.
If you don't know who these people are then you are truly blessed,if you do know these creeps then I'll pray to Paedophile Swami Sai Baba,another owner of a very stlish Afro, for your salvation,or salivation.
In fact there is a stunning resemblance between Alice 'Turiyasangitananda' Coltrane and creepy old Sai....observe....

DOWNLOAD from the universal consciousness of the internet HERE!
or
DOWNLOAD an alternative consciousness HERE!
Posted by Jonny Zchivago at 17:28

I feel like this album actually conveys the hyperbolic, ecstatic praiseworthy qualities that are usually attributed to her husband by critics. I like Love Supreme just fine, but this album sounds waaaay more like someone actually communicating with (a) god.

Now that I think of it, THIS was probably my introduction to ‘Lice. Remembering how most music in the higher consciousness realm leans towards etherial new-age fluff makes the string arrangements here all the more startling. Looking for ecstasy? Bliss? Here ya go, ecstasy in my little corner of paradise anyway. Just the thing for a redneck pub…cranked up to 11. All these years later this music can still blast away the cobwebs and dingy residue of the everyday. Sorry, the only things I have in common with trump are on the level of we both take a dump once a day, and I’m certain mine smells better. I spend my time on the throne reading, trump likes to broadcast tweets. They do in fact mesh well with the stench of dung…

Dude! permission denied, dude! That's not very cosmic, is it?

Oh Farquhar...try it several times will ya!....its Mediafire they do this....nothing can stop the universal consciousness of the internet ....NOTHING!

... the alternative consciousness link worked a treat. Please accept this hamper of exquisite foodstuffs as a token of my gratitude.

... I figured it out. In Firefox, if I click "open link in new tab", I get the Permission Denied warning from Mediafire. If I just click to open, I get the download. Weird and boring at the same time!

hey, thanks for bringing Alice into the mix. Kind of a fan here, she's like Sun Ra and Zappa, doing her own thing but with less humor and more actual spirituality, I guess. Trippy and chaotic and beautifully messy sometimes. And hypnotic. MmmmmmmmmmmmmHHHFHFGFHGFH kith<3