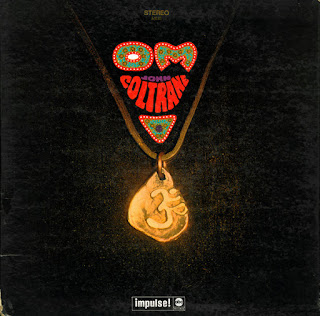 Here we go, yeah it's the 'Trane',and what has been labelled his worst album. A scathing attack by the same jazzbo journalists who thought Miles Davis's "On The Corner" was his worst album. Of course it is now accepted that "On The Corner" is one of the greatest albums ever made,but "OM" still wears its label of worst like a millstone. Now I can reveal that "OM" is Trane's bestest work wot he done!
It also happens to be the first Coltrane work that I was exposed to; therfore all previous works were judged by this standard.Expecting another bowel flushing  deluge of ecstatic horn blowing, "A Love Supreme" sounded like a Yes album, nice tunes but too safe for these times that we live in.
"Om" is a ferocious beast, with some groovy Hindu chanting from the Gita:
"I am, and the offering made to the ghosts of the fathers, herbs of healing and food, the mantram, the clarified butter. I the oblation, and I the flame into which it is offered. I am the sire of the world, and this world's mother and grandsire. I am he who awards to each the fruit of his action. I make all things clean. I am Om!"

Dig that cover of a medallion nestling into a hairy chest, that wouldn't have been out of place on Oddbod in "Carry On Screaming".Is that supposed to signify some kind of 'Black Power' or shit?
Allegedly, John and chums were off their tits on LSD-25 during this recording,but I think its too coherent for that.It makes too much sense to me,and I ain't never done Acid in my life.....there were plenty of other fools who did it for me, so why risk doing a Syd Barratt?We all know that LSD eventually turns you into Hawkwind,and who wants to do that to themselves? Jefferson Airplane getting turned into Starship,is a better example of what drugs can do to your creativity.It turns one from "White Rabbit" to "We Built This City On Rock and Roll".If you need it for inspiration then maybe you shouldn't do the arts at all? Lets face it, you do drugs to get off yer face,simple as that.Not to find a new direction in art....that's done by thinking stuff up.Y'know perspiration not inspiration.
Despite sounding like they can hardly be bothered to speak in the spoken word intro and outro,Coltrane and band are definitly inspired by the natural forces of freedom here.
I love everything about this posthumously released cash-in album, and it is Coltrane's best or,more accurately, his beast.

DOWNLOAD to your 'ome HERE!
Posted by Jonny Zchivago at 08:58

This album must have scared the hell out of your average jazzbo at the time. I've heard the LSD rumors, the one I heard said it was Coltrane. So perhaps is was Elvin. Maybe they all were. Makes me no never-mind. Listening to this is time well spent.

This, Afro-blue, Kulu Se Mama, Ole, Interstellar Space are among my favourites of
Mr J.Coltrane. Thank you and keep this stream of jazz for a while. Thank you, I think you have excellent taste.
Greetings Richard

I gots to gets this!

i never thought i'd give ole jc another try, but you convinced me. I like his wife's stuff a lot more...it's weirder and sits still in my thick head a little better. Man I hope this isn't some free built this city on jazz shit...totally agree on the whole drugs don't make better music angle you've got going here...people like to squeal how the stones did their best stuff on drugs...all i can think is how much better it mightve been if they werrent not fucked up..looking forward to this, thanks

Nope he still leaves me untouched! I can listen to Albert ayler all day and have a great time. I only have ears for Alice