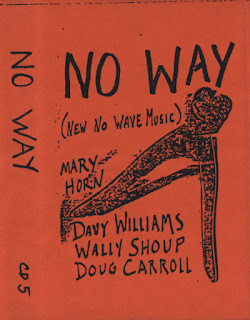 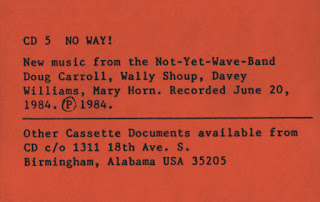 A full C-60 of "Not Yet Wave Music" from Davey Williams and unhinged cohorts from Birmingham Alabama.....wasn't that where Sun Ra came from? As opposed to Birmingham UK (Heavy Metals birthplace if you didn't know) which produced an opposite music (HM)to this barely structured improv, with hints of No wave.
This is one of the better recordings,featuring Davey Williams from this epoch, mainly thanks to Mary Horn's stream of consciousness vocalisation.

Thanks again JZ. You really have done some diggin' to find these treasures. I have to call LaDonna in the upcoming days. I was going to call, but thought it better to let the initial shock pass, but when I had my FB open, I'd mentioned doing a little tribute thing with some folks from my generation (or even younger) and Ms. Smith gave us her good graces and told me about a huge trove of recordings she has laying around the house.

Davey had played with some "kids" at this time, mid-90's, in a band called Fuzzy Sons which included several of my friends, all better musicians than myself. On those occasions that I played with Davey (including the Birmingham Improv Fest, which I have no idea if it continues now), I was always there to provide color and let Davey and my friend Randall just set things on fire.

It was always important for Davey that he pass his knowledge on to us 'young-uns' and he did. Jesus, what an amazing guy. Well, you know what I think and how I feel about him from our emails, but I'll pass on any relative info I get after I make the call back to the States to speak to LaDonna. You know, at any point in time, Davey could have played with anyone. When he was in form, there was nobody better at merging the blues with his own idiosyncratic relationship with his instrument. I'm really not exaggerating.

But thanks again for the flood of posts. The more people are acquainted w/ Davey's music, the better. I think I mentioned it before, but honestly, he could have been far more well-known than he was, but really didn't like to travel. After he lived in NYC and participated in that scene (he was really close to Tom Cora, another great improvisor who isn't with us any longer) and, of course, the duo from Chattanooga whose name I won't mention due to personal reasons on my part. He and LaDonna did more to bring the world to B'ham than any other musician I can think of apart from Sonny Blount, who most people don't associate B'ham with anyway as he left pretty early on. Hard to argue why he would do that. It was either Chicago or Philly that he left to, but that's another tale anyway.

Best- Been a bit under the weather this week, so I'll email when I get my strength back.