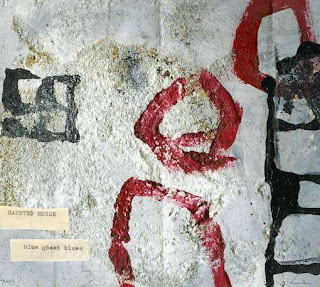 Ten years elapsed between Haunted Houses first and second albums, but nothing much changed,as didn't in the world of pop music in general,except that it probably got more lost in its own stasis.
Loren Connors' attempt at alt rock I suppose,but, as opposed to this very american genre, the emphasis is put on the 'alternative' rather than the 'Rock' bit.
Lets face it, a record recorded at any studio called "Seizures Palace" has to be, at least, good?

That's the one! Oh, thanks very much, Milly's Grandad.

Thanks so much for steering me in Loren Connors direction once again Jonny, mucho appreciato!

Thanks again, Johnny. I'm the guy who commented earlier about the phone conversation re: an intv w/ with Loren. I can't think of a more worthy guy to post. I would probably have said this in your FB group, but I've -at least temporarily quit FB- due to problems w/ old (fart-induced) flames harassing me and my wife. I'm talking women from 11 years ago. So...maybe this is better anyway.

Yes, Loren was extremely humble on the phone. I remember the conversation quite well. I'd encouraged him to seek out festivals to play at that time. This was before the age of the festival like we know today. It was really clear that he wasn't aware of the apprecitation of his work, and yeah, it was obscure at that point, but very clear that he had something special. I recall having a conversation with Davey Williams, who had caught him live in NY. I dunno if you're aware, but Davey just passed away, a guy who is without a doubt, a world-class musician who cut his teeth on the Chitlin' Circuit playing w/ Johnny Shines et al. Davey had nothing but great things to say about Loren. I do remember that.

I'm still a bit in shock of Davey's passing due to cancer. Back then, when I was living in Alabama, there was a small but ardent community of music lovers. Davey and LaDonna Smith were at the fore of bringing the best to the little 'ham. You can probably imagine. Borbetomgus in Alabama. Later on I'd pick up the torch before I left and bring in some folks. Harry Pussy in their early, short-lived "years." Others. But Davey...whatever, lemme just say it, God rest his soul, he was such a beautiful person. I'd mail-ordered that Guitar Roberts LP, Blues for Rothko...and took over to his house and we listened, equally floored. That's high praise for Mr. Mazzacane. And deservedly so.

best to you an I wish I could see you on FB, but it's just such a headache now.

I did ask at one point a few months back. Has anyone heard any news about David Jackman? He's very special for me. I can't and won't subjet your readers to the gush. But...have you heard anything about him? Is he still with us? Is he okay? Maybe, I'm thinking, you might know. I'm in Paris and haven't heard a peep. Notoriously reclusive, yeah. But thanks again for all of the LMC posts. It's great to hear these again.

Yeah, Facebook...I try and keep personal life out of my music side of the blog.I have a seperate account for family,but i nver go on that anymore. But Die or DIY faebook group is safe.Could put the word out on there for news about David Jackman.....Philip Sanderson is a member,he might know some info? I assume David is still with us,or we would have heard i'm sure.
Wasn't aware of Davey Williams passing however!....I should/will post a couple of his cassettes in this run of avant garde guitarists, also as a tribute. The music lives on.
These people fit the remit here perfectly.....no ambition other than making innovative music, and no ego.
You're in Paris? How were the May Day riots?...i live in the south of france, and all we have is a hut made from pallets and a load of Gilet Jaunes eating and drinking everyday outside the Super U.

Well, if there were riots, I was unaware. I've been sous la vague myself. J'ai un peu déprimé. I won't bother anyone w/ the rote details. But I was out for a while today in the 9th where I live and it seemed fairly peaceful here. I like it when a lot of the shops are empty and some of the bars are closed. Paris, for all of its history and beauty, gets on my nerves. I'm a country boy and like tranquility. Perhaps soon I'll leave the city and find a place to settle down in...in the countryside. That way I can write. I'm looking for a very placid spot. Now, as I'm getting on some (just 50, but 50 is 50) it's not necessary for me to be in the middle of the mix. I prefer the smell of manure and greenery to whatever it is Paris smells like. Ca suffit.

Yeah, unfortunately Davey is gone...and it blindsided me. I haven't spoken to him, other than the occasional FB message, in several years, but I could tell that recently something was amiss when I spoke to LaDonna. She was talking about me coming back and I knew from that there was something just not quite right.

Perhaps some day we can meet and have a glass and watch the air? That'd be cool. You can email me (can you see my email on yr side?)...if you can't see it, I'll post another, less used email for spam and from there, give you my primary email. Most recently I've spoken to Joseph Nechteval and he's a really interesting guy. But Paris drags me down. Dunno. It's spring...I should feel better than this. Enough. Hope you're well.

Hate to admit it it, but I'm 55 you young wippersnapper. Its the drop zone.People we know start dying.Its hard to get used to.
I live in the countryside, its sheep country here. I stick out like a sore thumb, me being a city boy,and into making avant garde free rock.I even found my drummer in this village,a few doors down. ZOG is the band/duo...a few tracks exist on you tube.Theres an album in the offing on Siltbreeze however, later in the year.
Had a few e-mail exchanges with Nechteval a few years ago, an open minded and helpful chap.Read that book of his on plunderphonia and improvising.
No e-mail seen.....you can e-mail me here if you want jonnyzchivago@yahoo.co.uk
Paris in the springtime...wasn't that a song? Nice place to visit, but living there would drag me down too....too fucking expensive.I don't like working too much,lifes too short,as you know....its cheap here,living not life lol.

Cool - Saved your info in my contacts. And yeah, song or no song, Paris drains me. I get 50 Euros a week teaching an English lesson. It's pretty much gone straightaway. Supermarket, liquid for vape (smoking is too damned expensive and I've been wanting to quit) and maybe some change leftover. That's it. And that's not at the beginning of the month when I have to buy the Navigo. So...it's tight.

And congrats on the Siltbreeze. One of Fascist America's greatest labels.

Never really thought about Messrs Connors and Williams being kindred admirers but it makes sense. Davey was ground zero for outsider free improvisation in America, future posts of his and Smith's music would be treasured.... his music is pretty hard to come by.