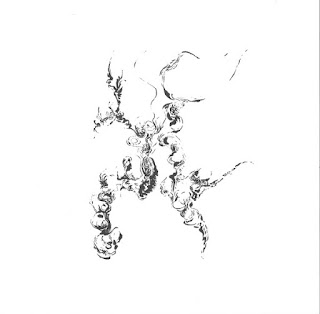 No, this isn't two chimps playing deulling banjo's on guitar!
Its Keiji Haino in yer left ear and Derek Bailey in yer right ear,or the otherway round depending on which direction you placed yer earphones.
Derek Bailey,as you know,was thee pioneer of the free jazz guitar, and Keiji Haino was....well.....Keiji Haino!? They both wear glasses,one of them perscription, the other off the rack shades that seem permanently sellotaped to his head.
Both have a tendancy to flesh out Chaos Theory on the six strings of a guitar,but without conventional chords,notes, or technique.
This was their first collaboration, or abberation, depending on your point of view,and I personally find it inferior to their second, called,ironically,"Songs", which you can find HERE!
I dunno, maybe this really is actually two chimps, and we've read too much into it,which is basically an artistic statement within itself?

DOWNLOAD some order from the chaos HERE!
Posted by Jonny Zchivago at 01:05

The Blessed Bailey is my favourite guitarist, listening to him playing I sometimes wonder why I ever bother listening to anyone else. I've got "Songs" but it's a long time since I've listened to it, so thanks for the prompt and, obviously, for this. Thanks again, Milly's Grandad.

You write the best reviews!

and you write the best comments jerry tanx!

I imagine both players might consider the two chimp analogy a compliment. 'If only we could!' Sometimes, this sort of thing fills the space better than what's considered music in most human circles. Think I'll turn up the volume on this, open the windows and walk around outside the house tomorrow. Bet it'll fit in just fine and perhaps convince me even I could smart as a chimp.... someday.