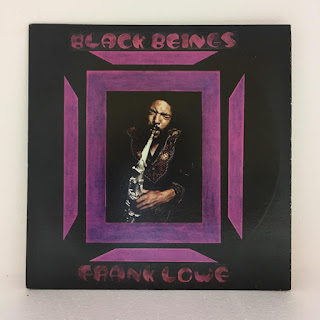 If you wanna seem sophisticated or intelligent then get some Free Jazz records, play them in the background when you're on the phone......."Excuse me a second while I turn down the JAZZ i'm really into........now what was it you wanted?"
Leave them on the coffee table when your dinner guests arrive, putting the more famous ones on the top,like "A Love Supreme",and leaving the more obscure ones just poking out, like Frank Lowe.
This will impress on the rare occassions that an actual Jazz bore crosses the threshold of your castle. Anything on Impulse, or BYG Actuel,or ,like this classic, on ESP Disk.
I bet you're already thinking I'm far more sophisticated than you are becuse I've posted some Free Jazz on my blog which is normally concerned with badly produced pop music from the cracked and crustier end of the rock'n'roll blancmange. Well, I like to think I am terminally sophisticated, and frequently indulge in the odd pena colada at my classy but faultlessly bohemion soireés with my artist friends, backed up by plenty of modal Jazz classics filtering through the intellectually stimulating chit-chat about John Paul Satre and or, Kant.....I said KANT you infantile moron!!!
Sophisticated soireés aside,this album is a classic, full of the kind of horn abuse that could severly damage your lounges paintwork.
It also features a violinist called 'The Wizard',so it must be good...yes?
I hope you don't think I'm as pretentious as you think I am, but I do dig this kind of Jazz,and am dreadfully aware of the reputation its fans bring to the party.As with most musics and muscians, the worse thing about them,beyond the silly ego's, are the appalling fans.A boil that needs lancing from most musical bottoms.
They are invariably Male,and need to get laid or something.
I remember witnessing a Sun Ra Arkestra performance in the Fez, New York, and two typical Jazz nerds had annexed the table in front of us,closest to the stage.Clad in matching 'Space is the Place' t-shirts like tweedle dum and tweedle dumber, they hi-fived each other and slapped the table everytime the Arkestra came close to uncovering the thirteenth note.
What these dreadful dweebs wanted everyone to know, is that they knew about Sun Ra first,and that they have more Sun Ra albums than you lot put together. Only Residents fans were worse!
They must have been crushed when Marshall Allen by-passed their table to play a sax solo at my table,mainly to serendade my girlfriend I admit,but needless to say, an Honour and a Privilege, and very funny.....funny ha ha, as well as, funny peculiar.

A1 In Trane's Name
B1 Brother Joseph
B2 Thulani

DOWNLOAD some black being sauce HERE!
Posted by Jonny Zchivago at 08:31

Love your comments. Everybody's cooler than me. They can proove it too!

Actually, I think the latter is probably more acceptable. I discovered Lowe a couple of years ago, 'The Flam' is another good 'un.

I rekkin' this will tell anyone anything thay'd like to know about Frank Lowe: http://www.espdisk.com/5034.html?fbclid=IwAR0kHGQMzn1LhshpHly1rI_-iYBmFKBars-3T29apUp4PyDMnauQO3MARpg

If you would like to actually support the music instead of stealing it: http://www.espdisk.com/frank-lowe/3013.html

Such admirable righteousness,but Its called sharing, especially when the artist is actually dead.

I haven't heard this in so long I have no memory of it. Nice to have the chance to hear it again. Many thanks!