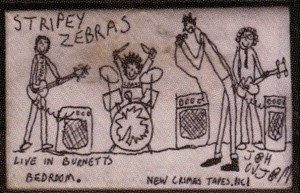 Basically,..... very basically,....this tape is a classic.
It's up there on a podium of pure cardboard alongside anything by such UK DIY  treasures as Danny and the Dressmakers, The Midnight Circus, Instant Automatons,Door and the Window, The Jubilets,The Barron Balls or even The Prats!?
Favourites on the Southend gig circuit,they had buckets for drums, a singer who sounds like an Essex version of Snagglepuss,or maybe Jinx the cat, on glue, and made an album in the drummers bedroom. Burnett was promoted to real drums at their live gigs, which was the first time he'd ever been behind a kit......now that's punk rock purity.
Then as with everything 'beautiful and pure', it becomes contaminated by the outside world. Eventually they decended into making more 'sophisticated' music, got better at their instruments, and wrote about 'serious' issues....yawn!
The evil virus of Anarcho-Punk penetrated this perfection, and various members formed various Crass style groups.....tut tut tut?
Graham Burnett, went on to create the fanzine and cassette label 'New Crimes', and form more 'serious' groups 'Enola Death' and 'Autumn Poison'.
Sadly the sub-genius that was Martin Fulton,the singer, died around the turn of this century i am informed! Why his fizzog doesn't adorn thousands of t-shirts worn by tormented adolescents the world over, and Kurt Cobain IS .....is quite frankly, a mystery of Marie Celeste-like proportions. Dave Mcullough ,late of 'sounds', should have re-edited his extremely daft obiturary for Ian Curtis, and replaced the lead subject matter with Martin Fulton....'He died for you'?

DOWNLOAD from burnett's bedroom to your bedroom HERE!
Posted by Jonny Zchivago at 11:16

Never thought I'd see this anywhere!!! I heard it once upon a time via Paul Platypus. My brother and I "learned" how to "play" the Stripey Zebras song Disco Disco in my bedroom, using our own buckets for drums. Awful stuff, but we had a few laughs, and I can't wait to share this with him. Thank you so much!

Do you by any chance have this tape compiled by Paul Platypus?

I would dearly love to hear "Overnight Snowball" by the Amsterdam Five again.

Sorry to say no sampler tape number one.
Indeed Stripey Zebras are sadly overlooked.
I do have a few more live tracks,and compilation contributions too.
May cobble them together.
Have fun, its a great cassette.....the idea of someone actually learning to play a Zebras song is in itself rather amusing.

Hi I am the 'Burnett' of 'Live In Burnett's Bedroom', and was indeed drummer of said group, actually it was cardboard boxes rather than buckets (we couldn't afford them) but I do remember that we would transport our 'gear' such as it was to 'rehearsals' at each others' houses in a wheelbarrow...
Also sorry to slightly fudge the narrative, but the anarcho/Crass inspired 'band' Enola Death and zine 'New Crimes' actually predated Stripey Zebras. I sent a copy of Burnett's Bedroom to Penny Rimbaud for consideration for Bullshit Detector but it got turned down - can't think why!!! Pen later told me he actually liked the tape much more than most of the stuff they got sent and was much more original, and still speaks fondly of us today.
Martin (Sam)'s passing was a tragedy, he was indeed something of a subgenuis, fondly remembered although not always the easiest person to get along with. I am still married to his sister Debby by the way.
Great to see this tape resurface and pleased that there is still an interest - sorry we all got more competent and 'serious', such is life I guess, nothing remains 'pure' forever but those were magical times!

PS Jonders - I'm very impressed that you actually did a cover version of Disco Disco! Would love to hear a recording some time!!!

We did a couple of reunion gigs in 2013 - the first was at The Railway Hotel in Southend on Sea at a party to celebrate my survival of cancer in 2011, the second was at the late lamented 12 Bar Club in Denmark Street which was filmed. As you can see the talk of our 'over competence' may have been oversold... https://www.youtube.com/watch?v=9rFpL7-HSvc&t=128s

Hi Graham....an honour indeed.
Thanks for putting me right on Enola Death, i just assumed it was the other way round!
The Zebras should have been on Bullshit Detector, but i'm not sure the anarcho public could have coped with the humour,and am surprised that Rimbaud got it.
Congrats on overcoming the big 'C' by the way.
I wrote something for record collector a few years ago, where Live in Burnett's Bedroom, was listed in the top ten DIY tapes of alllll time. I think i still have a copy somewhere.

Hello, following up Graham's points we have compiled most of, if not all of the Stripey Zebras canon in one digital download called "We Are Mighty, We Are Stripey". This is available as a free download/pay what you want at the link below.

Just to bring the story right up to date, I currently run an 'open mic' club at the Railway Hotel in Southend on Sea where once a month we bring together adults with learning disabilities with other musicians and creative people in the town to make music and express themselves. The aesthetic is still very much in keeping with what drove Stripey Zebras, ie, chaotic, DIY, messy, DIY/DIWO, non-patronising... Can't beat being in a room full of folks with autism and down syndrome punching the air to Kill The Poor and Hurry Up Harry, and the odd Stripey Zebras cover still sneaks in... More here... https://www.facebook.com/jumpupandjoinin/

I've always got on well with Penny Rimbaud and his musical tastes are very catholic, as are mine, in fact we made a connection when I asked him questions about John Cage and Stockhausen when I interviewed Crass at Dial House back in 1980 and have been friends ever since... So he totally 'got' Stripey Zebras, but unfortunately we didn't fit in with the 'political' agenda of the Bullshit detector project, which I quite understand. A song about Charles Hawtrey's trousers falling off in front of Hattie Jaques or Phil Silvers running a pirate radio station wouldn't really fit alongside ansgsty songs about nuclear weapon and rough coppers would it?

Graham, it would be a pleasure to share that song with you. Check this space again after the weekend, and I should have it ready. There were a half dozen teens in suburban Wisconsin who thought you were brilliant.

I Like the sound of your learning disabilities music night.Any recording going about?...real outsider punk.

Stripey Zebras in between two songs about Bent Coppers and Nuclear annihilation would have made Bullshit Detector eminantly more listenable.I wanted to scrape my stylus off the bloody thing after about the 5th track.....but at least it was cheap eh?