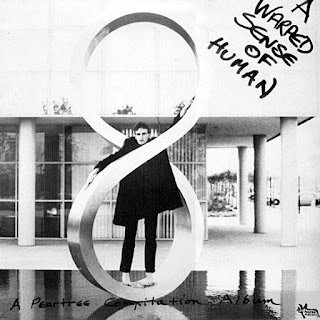 From a place more famous for its concrete cows sculptures than its music. This is a compilation of various post-punk groups from Britains premier 'New Town',Milton Keynes.
Along with the "Cows",the sculpture on the cover is called "Octo", created in 1980 by the artist Wendy Taylor and is still on display in Milton Keynes today....unlike all the bands included here.
Its all good stuff, maybe except for chunky pub rocker 'Kingsize Keen and his Rockin Machine", who are pretty terrible.
Needless to say that none of these acts were ever heard of again.

I keep seeing this around the web, it's particularly of interest to me having lived in Milton Keynes (I don't now, the roundabouts made me ill)

The bands I know of and have seen are the Dancing Counterparts, the Fictitious and Ethnik Minority (Alison and Dave got married and made the national press due to all the punks who turned up!)

My personal favourites are the Fictitious, Tiggles the singer was a great frontman and these two songs nearly capture the live sound. They should of been massive. Mind you so should of the Dancing Counterparts

Milton Keynes is a different place from when I lurked around there, I was proud to say I lived there, now I would rather pluck out my eyeballs. It's a dreadful town, no soul and the inhabitants are generally ignorant.

cheers...nice to see some old UK comps,mostly of them I've heard already but I'm still looking for some titles and it would begreat if possibile to hear some of these...I Hate Life In New Malden;leisure Sounds Annual;Beat The Meat;State Of Confusion;Spirit Of An Age Old Anthems;Relidious Vomit;Pulse Of Nation...just name it few...BIG thanks in advance

loving these post-punk compilations...many thanks

Cheers all.....Trgec, not got most of your requests list,but i do have "Religious Vomit",considered putting that up when i was do all that New Crimes related stuff....but it'll have to wait til i've done all the remaining local comps....i'll upload it and leave the link here in a few days.

So many bands that I never heard back in my days as a teen in Los Angeles. Now I can only wish I did. Thanks for sharing my friend.

Well thats a blast from the past, I was one of Ticketz, Loz Harrison (Rhythm Guitar) Dave Cummins was on vox and lead guitar, I recall one of Dancing Couterparts jumped on Bass for us during recording session which was recored on a 4 track tape machine at Peartree youth centre.
Dave and I then spent some time busking on the Paris Metro and Ticketz disbanded about 8 months after recording these tracks. Dave Cummins moved back to Liverpool to work in the NHS, I moved on to Band Management and now run the Acuna Digital Record Label Group, Can not believe these viynls are selling for between £100 to £140.
Met a lot of nice people in MK.