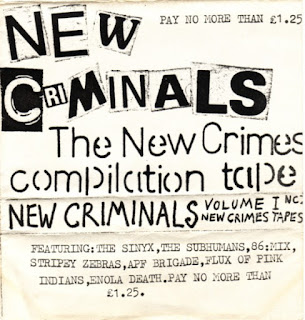 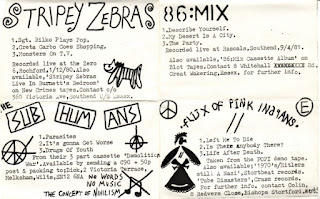 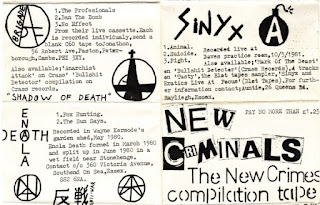 From The Thought Criminals to "New Criminals" Volume 1 on New Crimes Tapes, An Anarcho-Punk leaning fanzine label from Southend-On-Sea.

Despite appearences from The Subhumans and Flux of Pink Indians, there are some UK DIY classics on this.Especially from the DIY myth that is Stripey Zebras, and 86:Mix...which is a new one on me.

At one time Paul and I considered 86 Mix as possibles to be on Namedrop Records, he sent me about three cassettes full of people he thought possible and I liked "My Desert Is A City". Good to hear it again. My old tape copy had some fault in the copying which made it stop a few times at the end, making random pauses of a second or so. I thought that would have been a good effect to reproduce on record.

There is a sad lack of anything else by 86:Mix...except an appearence on an Adventures in Reality compilation.
Tape behaviour is always a fruitful source for new ideas I find.

86 Mix actually have 2 'cassette albums' out there, 'The Baby Banjos' released by Blot Tapes and 'From The Fridge' which was a live compilation on New Crimes tapes. Bass player Chris Kemp aka 'Voss Trent' may be able to help as I know he digitised some of the 86 Mix stuff. You should be able to find him on Facebook.