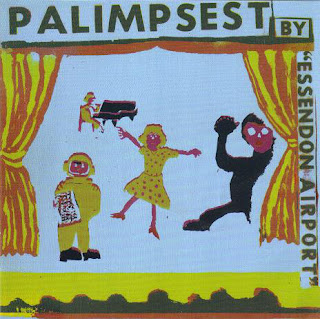 Correct Pitch?
No Quarter
Re-funkt
I Feel A Song Coming On
Jig
Like Young
Trad Jazz
Science Of Sound
Beguine
What Is This Thing Called Funk?
Rhythm Method
Entrance Of The Gladiators
Happy Ending 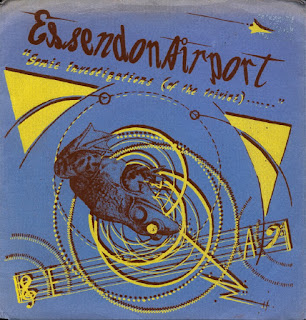 Well you know that '→ ↑ →' and 'Asphixiation' involved the members of Essendon Airport right?
Well here's Essendon Airports early records featuring no less than those very same members of Essendon Airport!
Blatantly the music of educated university graduates, this electronic version of Muzak suggests there must be an underlying theme to all this? Something we are too dumb to understand.There is a track title here, called "Wallpaper Music",which I suggest nakedly reveals the artists intention.
Its minimalism and non-rock uncommerciality is in itself admirable to behold;but there's again something rather sterile about it......nothing wrong with that however,just an observation.
I know this is good, but it just feels disposable,like the Elevator music it parodies.A world where humans are optional, except as consumers.....which you aren't if you download this file without the vulgar process of exchanging tokens of credit for it.That would just ruin everything!

The DOWNLOAD is now boarding at gate 1 HERE!
Posted by Jonny Zchivago at 15:21

Speaking of being out-obscured, i lived in Melbourne up until recently and found many Innocent Records releases. However one remained elusive: New Music 1980 (NON-008). I had the previous various artist compilation New Music 1978/1979 (NON-007) in physical form but even in the world of file sharing I've not come across New Music 1980 either. On discogs there is one copy of New Music 1980 going for like $300 Australian....haha I don't bloody think so. So anyone out there....

Speaking of The Southern Cross it's fucking shoved down our throats here. It's on the flag, it's in the bloody sky, it's used in advertising ad nauseam, it's on every 2nd bogan's tattoo etc.

Cheers keep up the good work.

I always thought Tortoise nicked all Essendon Airport's ideas. Perhaps, because Essendon Airport were an unknown and obscure Antipodean group, they thought nobody would notice.

I may have mentioned this before but whatever....Check out this fabulous hour long ABC radio doc on Melbourne's Post-punk/experimental scene from 77-83. This is one of the best things I've ever heard on the radio. It's the potential of what great radio could be or could have been.

There's one on the Sydney scene too.