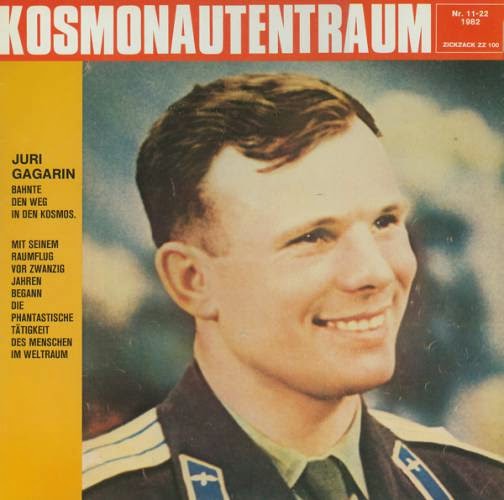 Allegedly,according to renowned liars the Soviet Union, Juri Gagarin was the 'First Human in Space". This claim is as reliable as their best mates,and rivals in deception,The USA's claim to have landed on the moon;despite the proven, lethal, Chernobyl levels of radiation  that exist beyond the van Allen belt.
This side of our protective magnetosphere,"Juri Gagarin" is a rather splendid synth augmented German New wave(Neue Deutsche welle) album that actually existed,and still exists. No political point scoring propaganda involved here; just some fine angular electronic post-punk,with hints of Gary Glitter Drums from the former NATO puppet state of West Germany.

To that boring Troll who I just deleted.You take everything,including your adolescent self, too seriously.
If you've got nothing better to do between wanks than troll me,would you kindly fuck off,cus my delete finger might strain itself.

Let's hope the troll finds more appropriate places to visit on the web. There are plenty to choose from.

I really love the final track of this. Thanks for the share. I'm on the side of Buzz Aldrin re the moon landings.

On a lighter note...Yes I have a tape by Youth Hostel,excellent it is."Tract House Leper Colony" its called.
Will Post it tomorrow.

With this final note, I leave you, because since you're a) too lonely to bear turning comments off, and b) obviously too drunk to really navigate other options available to you here properly (MY fault you can't delete the right comment? Sure....), this means c) it's too easy for me to keep yankin' your chain. And unlike you, I really DO have a life to lead outside posting some of the most meaningless, godawful shit known to man. (Which you intersperse with some truly great works. That's one of your major problems, that you're too stupid to even know the difference to start with.)

So, as you delete this final kiss, what you should take away from this is the thought that at one time during this ego-driven little enterprise of yours, you encountered one person who was prepared and able to call you out and shoot you down for the laughably inane, bullshitter twat that you are, but instead settled to just hurl juvenile softballs at you instead. (Though you might regret that fact that said softballs were also aimed at about the only level you were capable of responding to anyway.)

And once again, then as now, not that you understand the hows or whys - but I win. Emphatically.

No,i'm not gonna delete this incoherent drivel . I'll leave it here as an incriminating coup de grace on your own reprehensible psychological sewer of a personality. And you accuse me of being ego driven???!!.....You win!..Win What?....Trolling Sociopath of the month?..childish beyond words.In fact sorry children of the world for comparing this sad sad unhappy chappy with you.
(and he/she/it has a life apparently?????)
You're just a TROLL...the kind of a nothing who would have been a Nazi camp gaurd in WW2.

Like fish in a barrel, I swear God, lol.

In fact, I have a new idea now. Though I'll only have time every now and then to do it, next time, after I finish kicking your ass AGAIN, I will also type up what your reply will be, and afterwards post it to see how close I nail it. Wanna try? Oughta be a hoot.

Oh groan!I thought we'd had your "Final Note"! This fantasists arrogance is of psychopathic proportions.
I think you'd have plenty of time to do it,as you're most probably unemployed,and unemployable.
Yeah should be a 'hoot',but how do we know if you haven't prepared your prediction after i post my reply to your future 'ass kicking'?