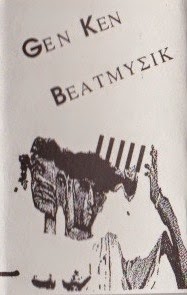 Another music format that didn't produce many protagonists in the US of A is yer minimal synth. What you generally got was an electronic version of Punk, like The Screamers,or a twisted version of the R'n'R myth,like the fantastic Suicide; but no cold basslines and minimal electronic noises,set to a simple drum box beat,with a emotionless singer atop. This was the preserve of northern European countries, such as Belgium.
I don't think it resonated with the American psyche. It didn't 'Rock',and was generally negative sounding and claustrophobic.One hope was the most european place in the US....ie New York.Which is where Ken Montgomery ran his record store in the east village called "Generator"......Hence the name Gen Ken! It all makes sense now.
Remarkably, he made some supremely minimal electronic music from as early as 1981,which this Sound of Pig retrospective cassette collects together for us to do android dances to when no-ones looking.......but they always are looking, so don't do it.Dignity is worth more than fun,don't you know that?

DOWNLOAD some musik you can't beat HERE!
Posted by Jonny Zchivago at 10:50

Nice! Not claustrophobic as you say. Not angsty either. New York cool. V. nice.

Do you maybe have Gen Ken album "Greatest Hits" from 1986 on De fabriek?

Sorry,no greatest hits.Got: "Endogeny" "Drilling Holes In the Wall","Ice Breaker" "Gen Ken's Fridge" any of these interest you?

Thanks for this, Jonny!

@Pawel - GK's greatest hits lp is readily availbale on soulseek. I'd upload for you but my external drive is in hospice care ;-)

Are you sure you put all tracks? Missing are tracka number 10 (Innocence) and number 4 "Countdown".

hi, its highly possible that I may have missed a couple of tracks.I will check in the morning.

Thank you! Do you have any more from him?

Yes, i've got one called "collaborations" where Ken...er...collaborates with various minor stars of the underground.