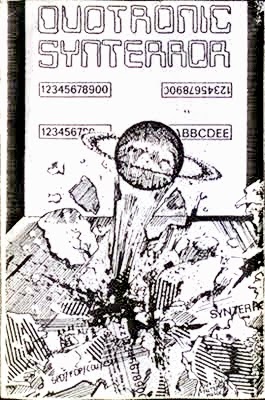 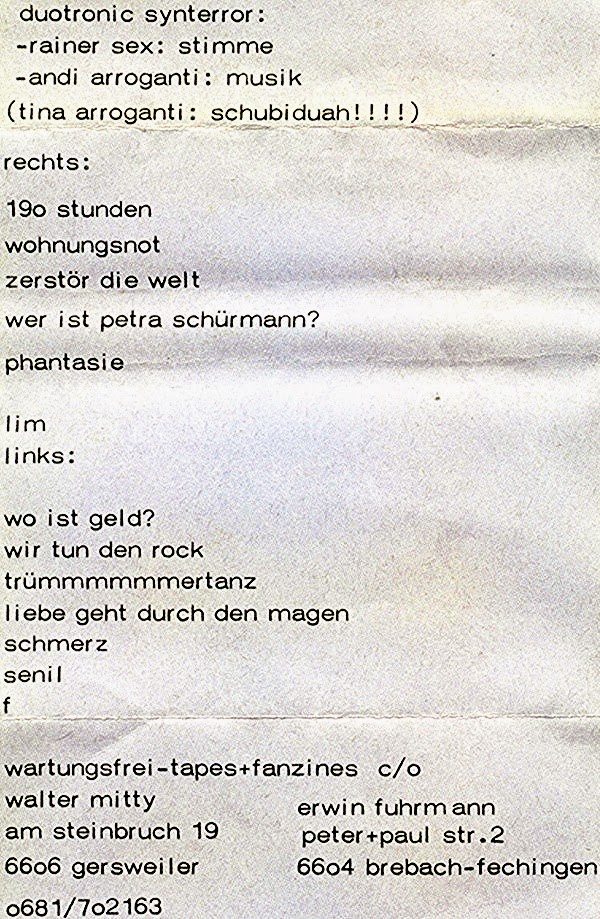 This minimal electronic duo could only come from Germany. They sound like a ecomony brand DAF,sing in German,and have been seen with their shirts off on an album cover. Two pale sickly youths called Andi Arroganti and someone was called R Sex(is he alluding to arse sex?!).Dunno whats going on there,but they must have been rare examples of Germans with a sense of humour? They didn't have DAF's oiled up muscular torso's, but they could churn out some pumping proto-EBM after they got home from stacking supermarket(probably ALDI's) shelves of an evening.
As featured on the excellent German cassette underground compilations;"Kassettentäter - Deutscher-Kassetten-Untergrund" (1979-1983) Vol 1 and Vol 2.

Ahhh, great Tape. A sadly very underrated band.
Here´s another of their 2 or 3(?!?) tapes on the other great blog on the net:
http://tapeattack.blogspot.de/2009/09/duotronic-synterror-pech-schwefel.html
R. Sex stands for Rainer Sex which is pronounced as reiner Sex (pure sex)in German.
Petra Schürmann was a well known German TV announcer in the 80s.
The great label WSDP aka "Was soll das?Schallplatten" released a very very ltd. LP compiling tracks from the tapes and maybe some unreleased(?!?)"Sei still!" can be found on youtube.I think it´missing on either of the 2 tapes.
Has anyone the LP "Zerstoer Die Welt" for sale or download?

Me again:
In fact they released 3 tapes:

Has anyone the 3rd one?

JUNI on wantlist, yes and no, still searchin'

Thank you for everything! This blog is everything I've ever wanted.