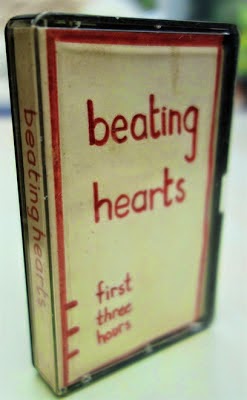 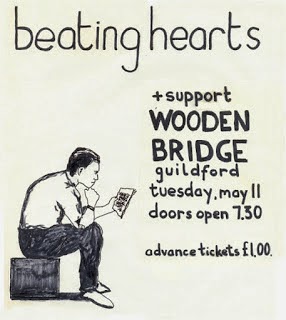 The next instalment in the Keine Namen, Controls, saga that tracks punk rock's evolution from the primeval soup of punk's year zero, to the new prog of post punk. Here we find The Beating Hearts, as featured on the legendary "Beyond the River" compilation, finding their post punk feet with "The First Three Hours" demo tape.This was sent to Chris Green, latterly of the excellent Criminal Damage label, but then of the equally excellent X-Cassettes.(check out some x-cassetes compilations here and Here). The music is sort of like Section 25 as recorded by Martin Hannett with none of his legendary equipment, except a cassette deck with inbuilt condenser mike, and a reverb unit made from a damp cardboard box. Not unlike a live Joy Division bootleg, except with even less people in the audience.( yes, everyone's seen Joy Division haven't they? ....I once made the mistake of turning down Joy Division, supporting the Buzzcocks, to go and see The Slits, and the Subway Sect, on at a rival venue. By the reports I received of the gig, everyone was in the bar when J D were on,and came out when the Buzzcocks played! Oh, the choices of entertainment you had in 1979!). I'll let Tim, previously referred to as 'The John Boy Walton of Punk' in these unhallowed cyber-pages, fill you in on the Beating Hearts story(Active:  late-1981 to late 1982):

"After Controls (Mk 2) called it a day in early-81, Tim Naylor and Kerry Kirk formed a short-lived outfit called Heartbeats with a girl guitarist (Tina) that rehearsed a few times but never played live.  Tim then joined a Farnborough-based four piece band called Spod (also the name of the girl vocalist) as bassist, but left after six weeks as he wanted to put his own outfit together.


Through contacts at Kingfisher Music in Fleet (“The West End Store in the Sticks” according to the Pearl & Dean style ad that used to run at the local cinema), a series of revolving door auditions started in late 81 for a band Tim provisionally christened Beating Hearts and a number of jams around a song (Listen to the Heartbeat) gradually whittled the wheat away from the chaff.


One promising line-up featured Jim Rump on vocals and Kerry from Controls with a former mod guitarist Steve Gerry, but that failed to take off.  Gerry recommended Simon Baggelley as a guitarist and Tim invited former Control guitarist Jon Monks to come and try out on keyboards (Jon’s preferred weapon of choice). He also auditioned a young drummer Richard Jennings who had been playing in an anarcho-punk inspired outfit with Sean Burt who later vocalised with Black Easter.  This line-up crystallised into Beating Hearts, with Tim on lead vocals and bass.


Tim brought a clutch of songs to the first two ‘official’ rehearsals and in a brave move these were recorded live to cassette with barely any time for the band to learn them, which Jon then took away and edited into a demo called ‘First Three Hours’.  This comprised two post-punk pop songs ‘Being There’ and ‘Forget about Debbie’ (the latter appeared twice on the demo for some reason), the Joy Division-ey ‘New Pride’, another lengthy version of Listen to the Heartbeat (which was actually two parts rather inelegantly edited together),  a song dating from Controls Mk 2 called ‘You tore my heart out’, and an extended ten minute instrumental jam based around an echoed bass and synth line which Tim improvised some lyrics over called ‘Beauty Fades’.


This live demo was packaged up by Tim and dispatched to a few indie labels including the X-Cassettes supremo Chris Green who was in the throes of establishing a vinyl label (called at that stage Open Eye Records, but eventually changed to Open Door Records).  Green was exceptionally enthusiastic and offered the band a place on the ‘Beyond the River’ vinyl compilation.


Meanwhile, Beating Hearts made their live debut with a Saturday night gig at the Function Suite at Farnborough Recreation Centre, playing to a small crowd of Controls fans.  One new track ‘Wrap me Up’ stood out as the obvious candidate for Beating Hearts to record, and the band went into a local four track studio and produced a breakneck rough and ready version which was duly dispatched to Reading and Open Eye Records.   This was rejected as being in the wrong format for mastering, so the band booked into Matinee Music, Reading in April 82 with Chris Broderick at the helm.  A more sedate version of the track was re-recorded and eventually appeared as track 4 on Beyond the River (Open Door Records OD001)."

You can sample the Beating Hearts contribution to Beyond The River, "Wrap Me Up" (mp3)HERE!


4 Listen to the Heartbeat


6 You Tore my Heart Out


8 Listen to the Heartbeat take 2

DOWNLOAD and listen to the heartbeat HERE!
Posted by Jonny Zchivago at 10:43

wish I still had that bass... note very cool Between Pictures sticker on the scratch plate!

I wish they had recorded more...
I really like this band in fact xDDDDD