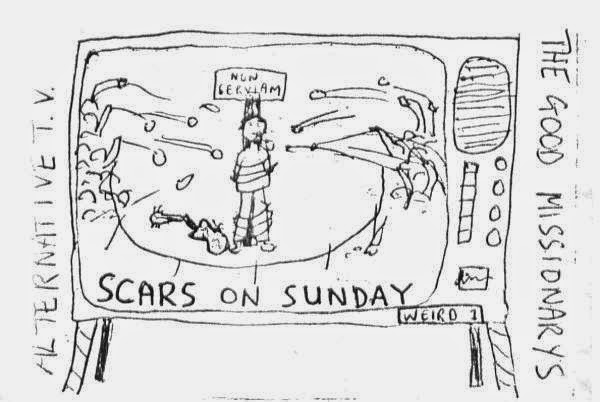 Side one is the penultimate Alternative TV gig at the Greewich Theatre in Spring 1979. It features the very shaky drums of Dave George and vocals from Anno Wombat. Line-up

Side two is the very first Good Missionary concert in "Bottom Of The World" a jam recorded at the "Gig of the century" in the Lyceum ballroom May 1979. The other two numbers are also largely improvised and were recorded on the "Pop Group" tour summer 1979.

CAUTION!
This is the first in Fuck Off records "Weird Experiments In Noise" collection and is a serious attempt to blow your mind with sound. As you may have noticed the long drawn out 'hypnotic' pieces (otherwise known as the boring bits) are necessary to bring out the sheer power of the noisy bits inherent in this type of music. While every attempt is made to ensure perfect audio reproduction, we must admit we quite enjoy that 'fucked up' sound. The Good Missionaries is a natural progression from Alternative TV. ATV in the beginning were a pretty hard hitting if not intriguing sort of punk group. However as time has passed, various members have joined and left the band until the final line up (recorded on side one) decided that the music had changed so much and lots of people were still coming to the gigs expecting the older line ups, that changing the name would be a good idea. About the time of this penultimate gig the music had got so weird that hardcore heavy punks had taken to throwing bottles at the band, on one occasion Mark was knocked unconscious by one, and during side one the tension in the air is easy to spot, as is the final destruction of the equipment by band and audience alike, after the PA is switched off mid-set. Side two starts with a jam recorded on the first Good Missionaries gig, a tentative affair where the group performed in masks, it was all meant as a bit of a laugh really but the band enjoyed the relief from not having a name to live up to, subsequently the content is less strained. The rest of side two feature two performances on the most recent Pop Group tour featuring the newest line-up. These additions and changes aid Mark in his former capacity as lead instrumentalist by stopping up a lot of gaps he used to have to run around the stage to fill all by himself. And generally I think it will be agreed that these later recordings show the band at their most relaxed and productive to date.
Sleeve note

DOWNLOAD some scars for sunday HERE!
Posted by Jonny Zchivago at 12:34

Thanks for uploading. This recording has always been a favourite of mine and it's great to have it ripped at 320kbps.

News to me Steven.I have no info on any rereleases planned. a cd reissue would be welcome,but i'd miss the tape hiss.
Thanks for your comment.

I'll see if I can contact him and will report back.

Good Missionaries - Empire Ballroom 1979 has recently appeared here for the thousands of people who are reading this.

Yeah got that, its recommended. He's also got a superior version of Rema Rema at acklam hall 1979, among all the mod revival bands that appear there recently.