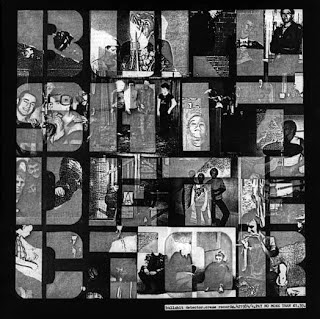 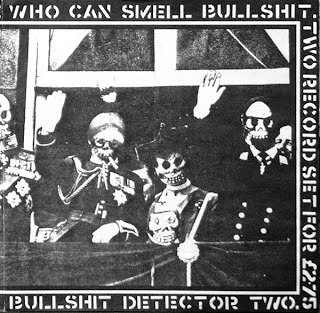 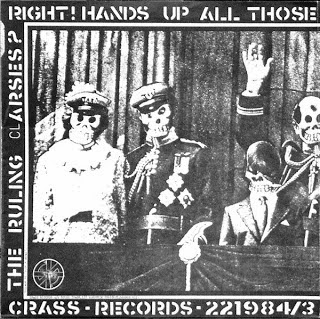 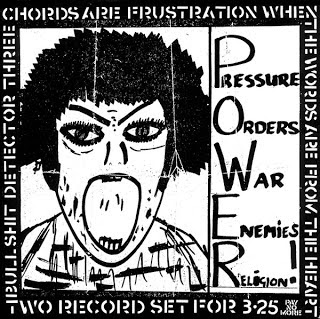 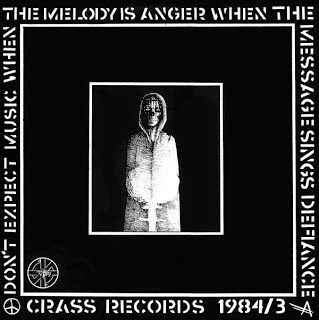 Fuck Me! Anarcho punk, (groan!); where do you start in explaining how such a depressing bunch of middle class hippies got turned into a uniformed movement that still exists in large numbers today!? It all sprang into existence through the misinterpretation of a single word in a hit single from 1976. The word in question was used mainly for its tabloid aping shock value. Frequently the cynical and illiterate hack journalists of the tabloid press, would use this word to portray 'Chaos' to spread 'the Fear'. Its a soundbite that conjures an image of Rioting, looting and rape in the conditioned minds of Daily Mail and Sun readers. This was the true meaning behind its use in The Sex Pistols "Anarchy in the UK"! It was absolutely not advocating the utopian theory of Anarchy as a viable future of all black clad white rasta's, before they inherited their fathers estate. Never before or since has a movement been based on such a dumb misconception as this, except maybe Soviet communism's misinterpretation of Marxism, and The Nazi's distorting of Nietzche's Uber mensch, maybe. Those two examples were rather fond of uniforms, symbols/insignia and mass hysteria like our Anarcho-punk chums! This is no coincidence methinks. The instigators of this 'movement' were none other than 'Banned from the Roxy' leg ends, Crass. Fine purveyors of truly awful punky music, and boasted the official Worst drummer ever. He was so bad that he made Palmolive look like Billy Cobham. Normally this is a Good thing of course, but coupled with their soap boxy piety, and self-righteous bleating, is a recipe for producing a gallon of projectile vomit. They did ,however, have a rather fine tune called "Do they owe us a Living"(included on Bullshit 1),as their first single; which if they split up after that was released, would have put them in the higher echelons of Punk Mythology. Unfortunately ,they carried on for another 6 years, giving us such DNA dissolving atrocities as "Reality Asylum", where we are treated to a patronising monologue on atheism, spouted by some posh bird who was obviously sent to some Catholic boarding school against her will, and is getting her own back on her MP daddy. Excuse the irony here......JEEEEEESSSSUSSSSS! The thing is that, I agree that 'They' do owe us a living, I also despise all religion, and there almost certainly isn't a god; but it all sounds so bleeding obvious, and worst of all I don't believe them. I suspect a bad case of alternative envy politics, ie they envy working class people. Steve ignorant was probably their token worker, but you never know with this lot! Yes Anarcho Punk looked awful(washed out black was never a good look),sounded awful, had depressing politics,but I have a cringing liking for these compilations of demo's from Crass fans and bands. Its a guilty pleasure of mine, along with Wings, Queens first album, and a Flock of Seagulls!? The recording quality of some of these demo's are abysmal, as in good abysmal! Some of these bands must have used tin cans with string for microphones! The guitar amps must have all had the cheapest transistors ever made, ones that would have been rejected by British Leyland in the 70's, and Renault in the noughties....yes that bad.......but a beautiful sound they do make for us. Even despicable Anarchy bores Chumbawumba's track is ,yes,Brilliant!!!???.....like a lost nugget from DIY land. (Chumbawumba anecdote: the Drummer in Year Zero records own Scouts of Uzbekistan, was in a crap group supporting them in the 80's, when these "Anarchists" told them to fuck off when they asked if they could use their sate of the art PA system! Yeah, the reality of anarchy is to abuse your power when you have it ,it seems.Wankers) The three Bullshit Detectors are crammed full of nasty fizzy no-fi punk rock, with the odd misanthropic poem thrown in! There's very little musical innovation on display here,and quite a lots of unabashed copying; lots of crass-a-likes and check out "Random relations" by Suspects on vol.2, which is a blatant impression of John Cooper-Clarke and the Invisible Girls!? Love these compilations(the best one is vol 2 in my opinion), but hate Crass and their clones; and you should too.

Haha! I enjoyed your write up for these comps. I'm in the same boat; I secretly dig some of the artier, weirder anarcho bands; and when I was a teenager the Subhumans and Rudimentary Peni were gods to me (I still love both bands). Naturally that led me into checking out Crass (actually like them better now that I smoke pot) and some other groups along those lines. After a while I realized that I didn't really care for the majority of them: too predictable, too preachy and too generic. But some of it is still great, and we just need to sift through the crap to get there. These comps have a bit of both! Thanks for posting.

Rudimentary Peni are/is almost avant garde, and brilliant. Maybe i should listen to Crass under the influence of Pot?....maybe not. I'm nearly straight edge me, its just the evil drink for me.
Have you heard "12 crass songs" by jeffery Lewis, this makes crass sound good. No Steve ignorant, and no awful,awful drumming. Just the lyrics, which are 'good', and 'melody'. No white rastas in faded dyed balck combats either.

You're a cunt but thanks for all the music. If you knew anything about Crass you'd know they hated the Sex Pistols for being sellouts and for using Anarchy in precisely the way you described. They tried to use their music to make the world a better place. They are a political movement, not a musical one, this is made clear by their tracks all sounding similar except for the lyrics. It was a way to spread ideas, and it worked and still does work. -t a non white rasta non combat boot wearing anarchist who listens to everything besides pop music.

Well Bully for you.
If you think Crass isn't 'Pop' then you're as elitist as head posh boy Rimbaud.
The Pistols/Maclaren use of Anarchy had nothing at all to do with Crass/rimbaud's over reliance on the word.The fact that they slagged the pistols for their misuse of the word shows that they completely misunderstood them....apart from that if the Pistols never did Anarchy in the UK Crass would never have existed, and loads off rich kids would have gone straight into banking rather than buying combats and a bottle of black dye.

I love Crass, and thanks for the music.

That being said, I think your taking the piss out of them was HILARIOUS, and those who don't like, or take themselves and Crass too seriously need to develop a sense of humor, move out of their parent's place, and get a life!

I had loads more to say, but when I tried to post, I said too much, so I'm keeping this short and too the point.

Again, thanks for the music, and the piss take is funny as all get out!

Thanks for sharing the second album. I was mainly interested in the "Capital Punishment" song since Ben Stiller (yes, the actor/comedian) was part of it.

@Phaota ...i have grave doubts that this is the same Capital Punishment as the american/ben stiller band. These will be all be uk/european anarcho punk groups. I doubt stiller would have even heard of Crass.