The Zchivago Reviews Series - 4/ The Nirvana's - "Never Mind" (On the truly very awful Geffen Records) from about 1990-ish! 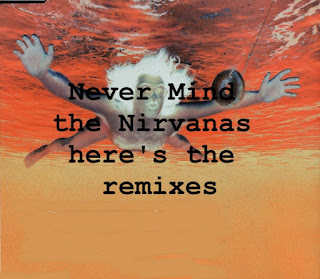 Losing the will to live,.......come friendly Virus and save me from listening to this truly awful overproduced indie rock shiesterpiece!
The reasons "The Public" go ape over certain groups is a complete mystery to most Shrinks,never mind us sad fuckers with...slight vomit...'impeccable Taste'!? The inexplicable thing is that we are told that Cobain had impeccable taste too(more vomit). That's what I disliked about him most, he reminded me of what I dislike most about myself,or more accurately what other people told me I had........yup...."impeccable Taste". This is why I prefer Flock Of Seagulls to Captain Beefheart these days. The dread of playing "Trout Mask Replica" and some fucker saying "Hey, Captain Beefheart...Cool! You're weird man"......Yes I'm fucking Weird,but not if you are....maaan.
I am well aware that being aware of obscure music is an age-old way of Showing off, as is the knob who strums an acoustic guitar as a way of discovering a way one can learn Charisma instead of actually having it. I'm comfortable with having no charisma and so should have poor little Kurt.
Although "Never Mind" is frequently seen in the top ten of these Best Albums charts, the Nirvans album that could render anyone deaf dumb and blind at 20 paces is that beyond terrible "Unplugged" thing they did for the despicable MTV.
Stripped of their electric equipment their songs reveal themselves to be even worse than the electric versions, full of chunka-chunka strummed four to the floor lullabies,interspersed with the lamest jokes ever broadcast.....hey these guys are Fuuuun!?
Cobain again shows his exceptionally good taste with some cover versions including that terribly obscure composeur, David Bowie......."That was a David Bowie song" Kurt informs the ignorant masses from the Hive. We applaud eagerly,then sit quietly like a church congregation and laugh at the humourless jokes.
Kurt sings "The Man Who Sold The World" as if he was taking a crap.Rather like most of the other songs they did...unplugged or Electric.
It doesn't take 'Punk Rocker' Kurt long,of course, to mention the adjective "Punk Rock",when refering to his pet LA Punk, Pat Smear,displayed like a Trophy on back-up Chunka-Chunka guitar,diamentrically opposite to a extraeneous Cello player,whose volume knob had been sereptiticiously turned off,but her prescence added that much needed coffee table friendly appeal to their white collor audience.
As for "Never Mind" itself, I played it in about 1991 and found it terminally boring and inoffensively radio friendly.
It shifted units and this made Kurt unhappy.....ahhhhh.
He didn't like the trappings of being a Rock Star,and found he was trapped on the ruthless rock'n'roll rollacoaster. Apparently he couldn't stop it,and continued churning out fashionable long-hair rock revivalism for the disillusioned also-rans of the lower middle classes. The cash kept flooding in,and Kurt got sadder and sadder. Never thought of just stepping off the train and making that experimental rock album he always wanted to make......didn't the Beatles do that?
Credit where credits due however,It was Cobain who finally cured me of wearing t-shirts with Band names on them......did you see that Daniel Johnston Tee? He must be good if Kurty boy likes him......that and the endless name-dropping...The Raincoats were good apparently, Young Marble Giants, The Meat Puppets,please tell us Kurt.....ok christ The Meat Puppets guested on that MTV thing,and things got worse...the i'm a humble rock star act increased in "I'm Cool"laid-back intensity,and when the Puppets sang.....my ears screamed and ceased to function for the duration of some awful americana cat fight which could win wars.Then Kurt competes and goes into top gear taking a shit singing (see,or rather don't see 'Lake Of Fire).......now where's that fucking shotgun!?
The Remixes:
1. Lake Of Fire(Zchivago Remix)
2. Come As You Are (Zchivago Remix)
3. Smells Like Shit (Zchivago Remix)
Click on the title to download or stream
or
Play it on YOUTUBE! HERE!
Posted by Jonny Zchivago at 12:37

Email ThisBlogThis!Share to TwitterShare to FacebookShare to Pinterest
Labels: Nirvana

your shite is ace anyway ~

Jeez the quality of comments has gone down somewhat recently.
@ a balding pole.....the world is sad matey.....i was bald when the Nirvanas were about....i was jealous of their hideous long hair and never had the guts to wear a checked lumberjack shirt.

Saw Cobain with Nirvana at the Ein Abend Am Wien festival in Rotterdam because everybody said that I HAD TO see them, well, I watched them for two songs or so, went, mehhh... and went to see another group on another podium (Son Of Bazerk, you would hate them).... Then later on, working in the cafe, we had a goddamn jukebox there and guess what people were playing all day long, over and over again? Yeah you got it, Nirvana and bloody Metalica, that Enter The Sandman crap, drove me insane....

It was the same crap when the Red Hot Chili Peppers came out, all those old punks telling me that I HAD TO listen to them and me listening and going... mehhhh....

Indeed Henk. I did consider jusy writing 'Mehhh',which would have summed it all up rather neatly,but I felt i had to flesh it out a bit.
Metalica...Mehhhh....that's enough on those pricks....exit the sandman.

1. nirvana had the chance to do ANYTHING differently than all the previous arena rockers, and didn't. 2. cobain was a simple small town hick junky that behaved like all junkies....dull cynicism mixed with reticent arrogance. 3. these songs are no good. 4. nirvana is a shitty bandname 5. he was so stupid he married that loud cow 5. he was too stupid to get rid of her before she got rid of him. 6. I thought rape me was a pretty funny song. Especially when a dance floor full of sea monkeys shook their grotesque booties while it played in the local itchy grunge bar.

oh and i forgot........this shit is all overdubbed, nothing live about it. And the disgusting slaughter of the covers is beyond a mention..but.........i just did.

Metallica may be too shit for words (who can deny it?) but they recorded LouLou with Lu Reed so they are IMMORTAL!

I AM THE TABLE!

@Kevinesse...during my meagre amount of research for this intellectually perfect analysis of the pop group The Nirvana's, I also drew the conclusion that Cobain was Stupid.You have confirmed this....now, like the hoardes of equally stupid t-shirt wearers under his dumb spell,it's time to move on...swiftly!

Hi, I have launched my own blog where I rip and post extremely obscure electro, noise and neofolk. Hopefully you'll follow it and find something new. https://battlefronthymns.blogspot.com/

Hi Tristan, I hope you're gonna see this through and not give up after four weeks?
Looks promising, so i've put you in my 'Good Blogs R Us' section....in return you know what you gotta do? ...links to here and
year-zero-records.blogspot.com

Nice one, hoping to find some nutty stuff and read some entertaining narrative.
Nice one.
JZ

If you look at the liner notes for Nirvana's previous album "Bleach" you'll see a brief note that lists the studio costs for recording "Bleach" topped $600.00.

And therein lies the entirety of the "Garunge Rock" revolution in 90s pop radio. Some industry "maverick" saw that price tag and jizzed himself. Just imagine if you took that $600.00 band and gave them some more zeroes to slick it up for radio! You could have a hit record without a cocaine budget! It's genius! And you don't have to do any R&D or "develop" an artist! Just poach whoever is selling decently in the independent market!

And that, my children, is the story of how perfectly intelligent people ended up puzzling out the meaning of "Smells Like Teen Dollar." And Garage Rock fans ended up eulogizing an album with a "Late 80s Rush Album" production sheen.

Fun fact: Parmalee the dog, as a young'n, briefly lived next door to Mr. Cobain. The asshole from whom I rescued/adopted Parmalee was married to some Nordstrom heiress, which accounts for his living in a multi-million dollar home on Lake Washington. By some weird happenstance, I actually got Parmalee just two days after Mr. Cobain smoked himself. Sometimes I wonder... maybe Kurt was out in the yard one day, he looks over and Parmalee gives him this glare which says, "You suck, dude," and things went from there. Who knows?

@parmalee....you may as well hand yourself in for the murder of a teenage icon....that aside, that sure was a fun fact.

Added both blogs, thank you.

No intention for this one to go anywhere unless someone in their Ivory Tower nukes it.

In the early 90's artists, particularly in indie circles, had to drop names for the press because there was no internet. Sorry if the crassness of those times bothers you.

Good luck to you Tristan, I gave up after...six years I think it was? I can't remember anything anymore.

He was not 27 he was 49! Just like with the boy bands and stoner hollywood college films do it. Foo Fighters are much worst though. Heart shaped box was the experimental album dummy. I'm never signing in again. Fuck that I want to be coward because I say braver things then. Makes sense. You serve shit to get shit. The cycle neverends. Do you think maybe Cobain reached nirvana before you know? I like to imagine he did. Sigh.