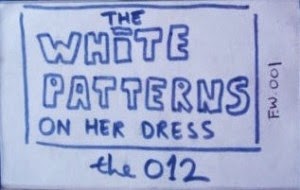 Before they got “professional”, the 012 made an even more amateurish single sided C-90. Full of trademark atonal, arrhythmic, deconstructions of well known hits, and improvised Free punk numbers. Keith 'Kif Kif' Dobson's cheese grater on slack fishing wire guitar sound is unparalleled in the modern idiom of Pop and rock and Roll. Some would call it a terrible racket, but I would describe it as the sound of year zero, liberating the open eared from the manacles of corporate rock, which had a stranglehold on pop culture just five years before; but then 'I' would say that wouldn't I?
The ambitionless looseness, unrehearsed for weeks, almost Coltrane-like confrontation of popular taste; make this tape essential listening for the hive dwelling masses of this increasingly amorphous planet. The sound of freedom from acceptance,and the creativity numbing power of 'needing to be liked'!
Now preserved for posterity in a high quality 320kbps replication of its original lo-fi glory(and edited into individual tracks at last!), this is your chance to flush your sound receptor synapses of that subliminal garbage that penetrates us from every angle.
The album title eerily seems to predict future institutional abuse! Does it refer, retroactively, to Monica Lewinsky's dress? If only we had listened,we could have stopped Clinton's long trail of sexual abuse that continues to this day. Maybe even Saville would have been outed, if only we had understood this channelled message from the 012!!?
Don't forget kids, it starts with the classic “Fish From Tahiti”,and it's better than their second 'proper' album“Let's Get professional”.

DOWNLOAD onto her Dress HERE!
Posted by Jonny Zchivago at 21:45

If the beautiful title of this record had to do with something as banal as Bill Clinton's ejaculate, I would be very upset. I think you're absolutely right about the studied sloppiness of the performances - these are clearly proficient musicians. But I, for one, have always wondered why it's compulsory to try to make the "best" music one can, and why an effort in the opposite direction couldn't be just as valid.

Thanks for the upload.

Oh, if only the sordid events in the whitehouse were banal Antonio. The worlds most powerful man caught lying with his pants down, and nobody did anything about it!?....sceech.
But of course this recordin has nothing to do with that shit, I just use every excuse to slag down authority to help my latent anger problems....caused by these wank stains that interfere with normal folks ordinary lives,just because they can.
And, Yes, there is nothing more boring than a craftsman; be it a musician, painter or woodcarver. To reattain the lost abilities of a child is the hardest artistic progression an adult can achieve. This is the highest form of craft.The 012 nearly get there, but that adult shit just creeps in; they know too much about what they are doing to score top marks.

Maybe the title comes from here..

"Bombs are dropping everywhere,
Radiation is burning my family,
My little girl's gone black,
Except for the white patterns on her dress"
from track 2: 'Age of Aquarius'

Cheers for this one Jonny, woke up with the 012 in my head, hit the vinyl as I was feeling extremely professional and then I landed here for more 012, world domination is mine!!!

Well, its not everyday that anyone wakes up with the 012 in their heads.....cheers back at cha.