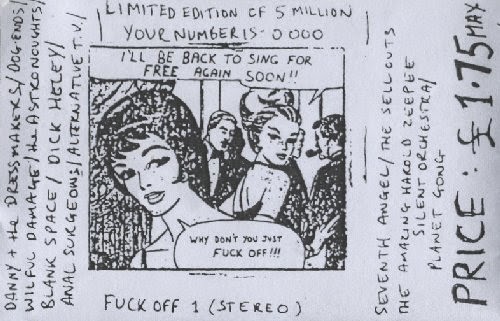 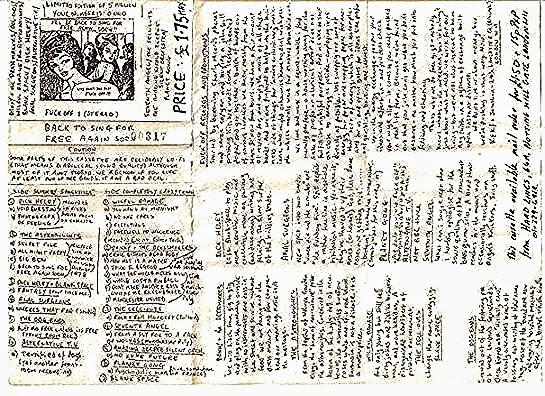 Here we have, in a limited edition of 5 Million, catalogue number Fuck Off 1 (yes, the first Fuck Off Records release!); “Back Again To Sing For Free Again Soon.The fabled compilation from the beyond great Fuck Off records from UK DIY's year zero.Now re-edited and remastered in 320kbps.


Side one (Slightly Sanesville), kicks off with a 21st century Glastonbury act  from 1979? It's the unbelievably


awful Dick Heley; who was an unwelcome manifestation of the kind of earnest young man with acoustic guitar that still plagues modern pop deep into the teenies of century 21! Its the kind of crap that makes one want to punch some fucker and beat them to death with one of Mumford and son's fucking banjo's! (Growl!)


It gets worse, because he seems to have three tracks rather than the two listed on the insert....Ouch!


It make it slightly better, three tracks from free festival stalwarts “The Astronauts” repair the damage somewhat with some lyrically aware nu folk with a punk rock slant. Never really my cup of tea,but after the first three tracks they almost sound like the first time I heard Joy Division.


Then, “Fuck Me!”, its that Dick Heley AGAIN!....this time backed up by the half-decent Prog of Blankspace, so its not so shit this time!


The Dog Ends remind me of the more annoying moments from the Missing persons cassettes.They probably are missing persons....mentally I mean.


After the extra track not listed on the insert, of a sing-a-long version of “Jungle bells by persons unknown, we get an exclusive track from the fantastic “Vibing Up the Senile Man “ era Alternative TV. A brilliant audience losing, noise improvisation on piano, radio, guitar, and drum machine, called “Terrified of Dogs”. Its hard to describe how great ATV were in 1979,but this piece sums it all up very concisely indeed.


Side two (Crazytown), starts with the wilful stupidity of uber-dumb manc punk band, Wilful Damage. Famed for the singer being thrown offstage at the legendary Deeply Dale Free Festival 1978, by the king of “TeePee People”, who said that he would personally stop any of these “Punk” from playing. Mr Wilful Damage consequently broke his arm in the fall, but returned to finish the set. The crowd were suitably Impressed, and probably turned quite a few 'Hippies' over to the cause; probably including certain members of Here and Now,who, as we know, started Fuck Off records.


The band itself is classic thoughtless Punk mimicry,and the introductions between the tunes, in a moronic Lancastrian accent, are hilarious.


OMG, its Danny and theDressmakers!(giggle)


They turn me into a silly teenager again everytime I hear them!


DATD are worth a small essay describing how fucking perfect they are. I do have ambitions one day to create a Vinyl on Demand style Box Set containing all this wonderful groups major works.I may give that crowd-funding thing a go,is anyone interested in contributing a tenner?


To finish off, we are hit by the revelation that there were musicians in 1979! Seventh Angel's jazz-prog opus is superb,as is Blankspace's floyd style prog closer.


Is the ZeePee Silence Orchestra those TeePee chaps who attacked our mate from Wilful Damage? And were they called the ZeePee people after all??


I'll leave you with the parting words of Danny and the Dressmakers from the Deeply Dale Festival 1979:

Be Back To Download For Free Again Soon HERE!

I would contribute to a vinyl reish of the Dressmakers stuff.

Not heard this since my old PC's hard drive took a fit or something. Ta much.

You know what Nathan G, I think we're onto something here. If I could get enough pledges we could finance this, and the contributors will get their copy,and the excess could be sold (in theory), to help finance further release.....mmmm....my brain is working.
Nice one.

What we really need is a Fuck Off Records box set!

Mmmm,well, as i worked out one would need twelve vinyl discs to house the complete Dressmakers back catalogue, maybe your idea of a best of box set for Fuck Off records is more feasible?
Would also be very good.
"The Fuck Off Box Set"