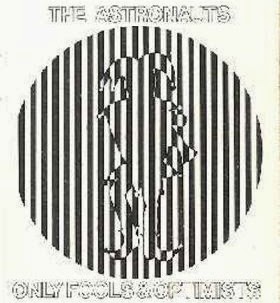 The Astronauts were another group from the melodic 'Folk'-tinged end of the anarcho-punk spectrum. As, in my opinion, Punk Rock is Folk music, this is something quite natural.
Long naturally curly haired Mark Astronaut, had the standard anarcho-office clerk kind of voice that was so popular with most of these awful groups; but the Astronauts stood apart. They had good socially aware and insightful lyrics, some interesting songs,and didn't dress in washed out black with 'i'm in the Anarchy Club' badges splashed everywhere like medals.This stuff is genuine Folk music,not affected by fashion and hive-like behaviour.
Don't let the Folk/Punk label put you off, this ain't the Levellers or ,if possible, worse. Think more in line with a more lightweight Zounds;and if you haven't heard Zounds,they're quite trad melodic post-punk punk with a folk-flavour to the lyrics.......in fact like The Astronauts, but a bit punkier!?

“This cassette is a rare treat indeed. Side 1 has the added bonus of having two tracks featuring the superb soprano saxophone playing of Lol Coxhill. This side consists of 6 songs recorded in a 16-track studio by various combinations of The Astronauts. They are all professional quality recordings intended for future release on vinyl. Side 2 is a bonus for those of us who have followed Mark's work over the years. It also contains 6 songs, 5 of which were recorded in the more informal surroundings of the various Astronauts domiciles. Obviously, the recording quality on this material is not of the same high standard as Side 1, but nonetheless the songs themselves are of enormous quality* and interest* and we felt we could not pass up the opportunity to release these rare tapes."

*even though they say so themselves!?


The songs on side 1 went on to become side 1 of 2nd album proper,"It's All Done By Mirrors".

What about this recording suggests that any of your fair followers are in need of a colon cleanse?

Is this a rhetorical question? Or should i say i don't know,what?