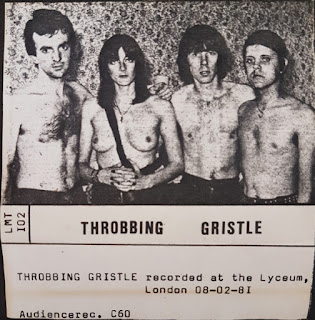 It wasn't just Jimi Hendrix who put some Breasts on record sleeves to sell product you know? That old Rock'n'Roll tactic was frequently used by those who should have known better. Though in the case of this bootleg recording of TG's final gig in the UK, I doubt it made any difference.....it would have sold-out anyway. It was 1981,and the mission was about to be terminated in that graveyard of great British bands, San Francisco.
Ahhh, the poor luvvies weren't getting on,and it shows in this slightly lacklustre performance musically speaking,which seems to be one long megamix of Gen's greatest 'Hit'....yep, 'Discipline'again.
Off to America they went,which is usually the sign that a band is finished, to split up......but don't worry they reformed twenty years later for a few quid in the pocket,like so many of them do.Only by then Gen had turned into a little old lady!?
Tracklisting:
1. Beginning
2. primal Church
3. Look Away
4. Endless Discipline
5. Discipline
6. Consummation
7. Endless Discipline 2
8. Ending
9. End
DOWNLOAD TG's farewell to albion's shores.....until they reformed for the dosh HERE!
Posted by Jonny Zchivago at 10:28

nice tits, shame about the face

I like her more with her top off. It is such a shame about time and gravity.
Eventually you end up like Jo Jo Biden just craving some apple sauce and a round of orange juice while your handlers program the cue cards about the glorious people's collective utopia or cargo cult free stuff.
Listening only on headphones due to residential and I can't wait to play on the stereozilla machine.
Utopia for the band didn't work out but we are still checking them out decades later so there is that.
Thanks for all the gristle!

Okay serious TG-ites: I want know if anybody here has listened to all twenty-four hours of the "TG 24" box set (or the "24 Hours" version). Preferably in one continuous twenty-four period of course.

This whole notion of it being somehow some sort of ultimate test to have listened all of them is ridiculous. I mean, I'm a fan, but there is an absolute shit ton of noisier, more abrasive things out there that could do your head in a far more serious fashion, if that was the effect you were after. (Maybe start with playing Metal Machine Music on a 24 hour loop - which actually I wouldn't mind trying. The time thing is the bigger hindrance than the content.)

But all this "in a 24 hour period" nonsense - nobody but a complete and utter pussy to start with would even take the concept seriously. (Money says a large chunk of them are probably Nine Inch Nails fans. Talk about your audio torture....)

"I hope your ears don't bleed or your brain turn to mush" - a concerned Chris Carter to this Guardian journo taking up the 24 hour challenge...

Yeah, I know CC said that. Love the guy, but he, too, is a wee bit more impressed and "concerned" with himself than he should be in this particular instance.

The NME reviewer came up with the destroyers of civilization?
Art as destruction? At least it's creative.
Cosey TF has a beautiful exquisite...pink ribbon in her hair.
A ribbon because it is a prize winner.
DL the cassette box last week and haven't listened to any of them yet.
The cold weather is approaching though.
The Muslimgauze, Throbbing Gristle, Boards Of Canada marathon will be going strong then.
A change of pace will be Big Boys or Bobby Soxx from the glorious people's republic of America.

Hey Pussy Willow - Did you know that TG were friends with Nine Inch Nails? "I'm a fan, but there is an absolute shit ton of noisier, more abrasive things out there that could do your head in a far more serious fashion" Are you 15 years old? If you like noisy, have you ever heard of Whitehouse, Organum or Runzelstirn & Gurgelstock? Nosier isn't the point of TG. It's the originality of TG that was key, not the shock value.

Hey Anonymous - I'd love to be able to respond to you intelligently, but since every word you wrote indicated you understand a single fucking word that I did, I'm not really feeling that inspired to do so. But here's a feeble attempt, which is all (or more) than you deserve....

Gen was also pals with Oliver Stone. So what? The dude was a master leecher - duh. Whitehouse and Organum are piles of utter shit. Woo hoo! Newsflash!
And thanks SO much for illuminating what I'm not "getting". NOW, after 45 measly, uninformed years, I can finally listen to them and UNDERSTAND it all. And how old are YOU, sweet cakes?

I'll leave out where sonically, a good portion of what TG did - while of course good, if not great - was also, at end of the day, not all that "original" to begin with, because that would clearly take you way, way out of your "knowledge" range. (My god - now that was an hysterical statement....)

Now go away, you silly faux-knowledgeable person, or I will taunt you a second time.

Pussy Willow. I understand that it must be embarrassing to be getting into TG this late in life, but better late than never! Yes, I'm older than you and listened to TG when you were soiling your diaper, and now ironically I am soiling mine as I write this! I actually remember when Industrial music became classified as a genre of music. Too bad history is written (and commented about) by the poseurs, late-comers and revisionists. TG was DIY. Don't be an Addelpate, a Dick Dragger, i.e a "Turd In A Trance". Ever listen to Nocturnal Emissions or Soviet France? Have you ever heard of Wire? “Words strain, crack and sometimes break, under the burden, under the tension, slip, slide, perish, decay with imprecision, will not stay in place, will not stay still.”

You are a ball of string.

I have grown bored with you, and have moved on to the pull cord on the shades.

Here is the remasterd CD version from the TG+ boxst:https://workupload.com/file/c7bJrSUdG9n