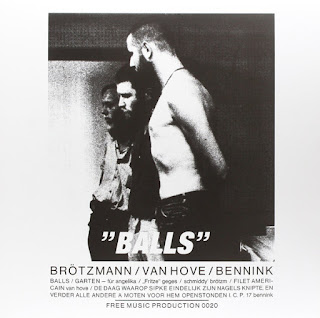 Never mind the Balls, here's Brötzmann, Van Hove  and  Bennink.
"Yes Cinders, you will go to the BALLS!",said the gone-bad binary fairy to the poor downtrodden,possibly sex trafficked Kosovan skivvy held in slavery by two ugly pre-op and post-op sisters. Alas, as soon as Cinders found out Peter Brotzmann and Hans Bennink were involved, she declined the opportunity, preferring a fulfilling life of slavery and sexual abuse instead. For one, the sheer sonic ball- kicking that these three musical renegades dish out from inside small art venues would have been enough to shatter Cinderella's glass slippers where she stood,lacerating her dainty bunions and corns,which would normally require hospital attention if she wasn't someone the Police would like to interview.So a dirty handkerchief would have to suffice.As for Prince Charming,he was last seen running with a rope looking for a suitable tree to end his misery.
"BALLS"....one of the greatest album titles ever to brand its simple profundity onto my failing retina's, features Bill Clinton's favored saxophonist, Peter Brötzmann,on...yes...Saxophone;ably backed up by the human dumpster,Hans Bennink, emptying its cargo of trashed tin cans and various clattering metal objects into your living room. Regular Brötzmann collaborator, Fred Van Hove, plays the Chimps Tea-party piano as if he was blind and deaf from birth;which, incidentally, is the only way to approach such an overused instrument.
This stuff is what Punk Rock wished it had been.The kind of Anti-Music,unmotivated by money or success,uninterested in audience approval;an uncompromising lurch towards the opposite,then turn left.Especially admirable is the blatant fact that Brotzmann plays the same sax parts on every single one of his hundreds of records,its just the silences that are different.
Your average citizen in this modern cesspit would say that this LP was just a load of "BALLS"; almost correct, those brainwashed fools just need to alter the context of their dumb insults slightly,for it really refers to the 'Balls' that are needed to make an anti-music like this. Post-jazz,pre-jizz improvisation with....yup...'BALLS'
Brötzmann did an album called 'Nipples' as well.(Cumming Soon).

DOWNLOAD the balls especially if it's not your bag HERE!
Posted by Jonny Zchivago at 00:55

Sweet! I've seen this listed in catalogs for years but never had a chance to have a listen. The music's similar to Taylor Swift, right?

Taylor Swift is on Sax in fact. There was a printing error on the sleeve.

Saw Brotzmann perform in the basement of the Middle East in Boston some years ago--they played on the floor, cuz they're hardcore. I was only a few feet from Brotzmann's face and he always looks like his head was about to explode, literally.

@ rev.b: it's closer to Night Ranger, in their finest hour, I think--like in this stunning performance of "Sister Christian":

@ parmalee...oi oi....lord Phillip colons to be listened to tomorrow to ease work boredom. Many thanks.

I saw Brotzmann several times, notably with Last Exit (Bill Laswell, Sonny Sharrock and Ronald Shannon Jackson with him). But in Sardinia he was stunning with an Italian group called ZU.
During the soundcheck both members of ZU complained with the sound engineer saying that they could barely hear each other (drums and bass) because Peter was too loud. "He's not even amplified" was the short and laconic answer...

Hey, I saw ZU too.I had a disasterous date,she left half way through the gig saying that it was too LOUD!...I stayed of course.....there was three of them that night,with a baritone sax....they were good I thought?...but ironic views on loudness there?

Played a couple of shows with ZU, and even more with sometime member, Stefano Pilia. Also, stayed in a haunted school house, in an unbelievably tiny town in northern Italy, with Pilia once. Exciting times.

Balls and Nipples, Oh My!