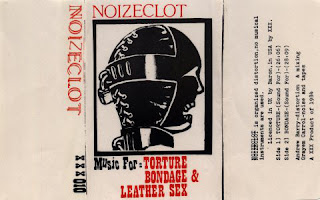 Staying on the theme of pervy sex,here we have a fake band called,rather attractively,Noizeclot;which was a short lived Inner-X-Musick project that utilized distorted tapes/noise instead of traditional instruments. The members of the group were listed as Andrew Barry, Grayem Carrol, and Sue Zan, but in recent years John Zewizz confirmed that this was in reality just another of his solo projects and that the band members were completely made up.Cheeky Sod!
According to Inner-X-Musick, Noizeclot is: "Pure noise, control of distortion and extreme sound. Antisocial music for those who have other interests, other than what the masses are interested in."....I saw that explanation and was mildly amused that Zewizz had just described myself,just like this blog is written for the same archetypal person described above. For the decerning Misanthrope..... with hobbies.
The music for torture part of the title,doesn't really apply, as the US Gestapo at Guantanamo Bay used Barney The Dinosaur and AC/DC played at ear blistering levels for hours on end as their torture weapons of Choice. I'd be admitting to the JFK assaination,9/11,anything, to get it to stop,even to voting Conservative, within the first few notes of the theme tune to Barney the Dinosaur,or even quicker when Barney sings the "I Love You" song! Horrific stuff that John Zewizz wishes he could equal only in his dreams!Pure Liquid Evil!
As for the noise on this tape,by modern standards this is pretty mild.Fuzzy warm background noise for flotation tanks or shopping malls.Most certainly not for room 101 in any interrogation center.
Tracklist:

A Torture-(Sound For)- 26:06
B Bondage-(Sound For)- 28:09
DOWNLOAD for that torture bondage and leather sex session you had planned for later this evening HERE!
Posted by Jonny Zchivago at 08:18

An AC/DC vs. Barney mashup! The card game that shall not be named has the faux Norwegian Barney called Bjorne and it makes me laugh every time.
The best and brightest apparatchiks could come up with something more torturous such as some (c)rap or girl/boy band agitpop.
Some teeve stuck on sportsball would be properly hellish.
My favorite cartoon shows a man enjoying himself in hell while two demonic entities are chatting with the caption...you know we are just not reaching that guy.
Voting? Voting for the global CCCP Uniparty mongo clown shit show just gives them your consent. Just say NO!

JZ, do you any of the other HIDIOUS IN STRENGTH tapes? Rather good (by Zewizz standards) and rather hard to find on the net, it turns out.

Hi Albrecht, yes i do,will be putting more up in the next few days among a few other Inner-x-musick tapes of various types.

Do you have French noise The Buttfuckers?

Any chance you could locate the imfamous Frank Zappa sex tape commissiones by the San Ber'dino vice squad?