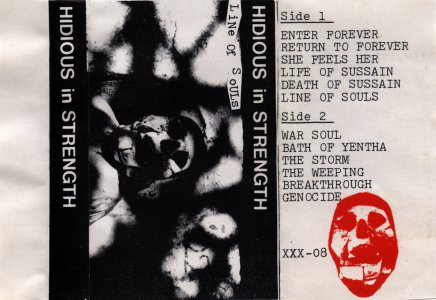 No, he still can't spell!?...isn't there an 'e' in Hidious?
Maybe John Zewizz is dyslexic, dunno,but such bad spelling on a music release hasn't been seen since the heady days of Slade,and probably never will again.
More Synth noodlings from the future man in the Women of the SS.
Back in the day if you could afford a cheapo synth and a cassette recorder you could easily emulate your synth wielding hero's by just twisting a few knobs and pressing play and record. The result was an international dumpster of sounds exactly like this tape. As for underlying themes, they could be just as easily assimilated from the burgeoning Industrial underground, y'know,torture, human primitives,Nazi Death Camps,systems of control,Blah Blah Blah. All a bit prdictable really,but it looked good,sounded ok no matter what you did,and was eaaaaaaassy.
Tracklist:

A1 Enter Forever
A2 Return To Forever
A3 She Feels Her
A4 Life Of Sussain
A5 Death Of Sussain
A6 Line Of Souls
B1 War Soul
B2 Bath Of Yentha
B3 The Storm
B4 The Weeping
B5 Breakthrough
B6 Genocide
DOWNLOAD an online soul HERE!
Posted by Jonny Zchivago at 10:33

Do we happen to know where this devious man hailed from? (Yes, I know...the US, but I meant a little more specifically.) I can't find any info when I looked up the SS Girls or Hidious etc. Even Wikipedia talks about him forming a band while in school with such and such, but never mentions where that school was etc.

@Mr P...I am led to believe that John Zewizz aka John McSweeny began his musical existence in Boston mass.

Here you go for more info an in depth descriptions of his sex life here:


Judging by the contents of John Zewizz's blog poor spelling is probably the least of his problems! (John Zewizz ... JZ ... Jonny Zchivago ... wait a minute! What's going on here?!). The blog is mostly about Sleep Chamber ... what an odd "band" to gain any kind of following ... playing 1980s-type EBM in the 90s, and rather poorly, w/S&M imagery and female nudity lathered all over it, yawn (does anybody remember Die Form?).

I don't mean to crap on anybody's musical preferences, but I am puzzled by Zewizz heading Sleep Chamber for twenty years on one hand, and his mostly good to very good solo stuff from the 1980s on the other, in addition to putting out several excellent V/A compilations on X-Inner-Musick. (I suppose the easy answer is Sleep Chamber's "opularity" ....)

You discovered my secret Identity!...yes i am indeed JZ of Women Of The SS...or rather I wish I was, so I could hang out with all those sexy Nazi birds.....down boy!
The coincidental initials however, have saved me from being in Sleep Chamber at least....rather shit be they.
Check out John Zewwizz's comment on my review of a Sleepchamber Tape....he was an ickle bit upset,and my attempts at humour went straight over his bald head.