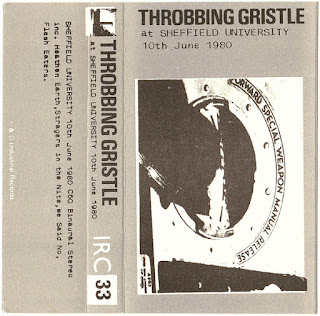 Sheffield is correctly cited not only as the birthplace of Stainless Steel,but also,and  just as accurately as the home of Industrial Music. Throbbing Gristle come from Hull, a place that can rival even Siberian industrial towns for gloom and pointlessnes that few people manage to escape from.But, there is a ferry sevice to Iceland from Hull,so it ain't all bad. Genesis and Cosey managed to penetrate the invisible wall that imprisons its populace to this day, and move to London where they met the other two. So see this gig as a homage to Britains' fourth biggest shithole.

Sheffield is,of course ,where Cabaret Voltaire, Clock DVA, The (early and good) Human League,Vice Versa...the group....and a personal fav of mine "I'm So Hollow", came from.Also where the wonderfully grim nuclear nightmare drama "Threads" was set and filmed.It were Grim! Nowadays,Its full of abandoned Steel mills,now gentrified, and the caked on grime has been stripped back to reveal some rather lovely brickwork. Pittsburgh is the U.S. equivalent i suppose, but what ever worthwhile came out of Pittsburgh?....don't answer that.

This performance ,is TG at their late-period swirling,effect laden best.There's even a joke at the beginning!?

I like these live 1980 ones the best. Bands that are at each other's throats can still create some great music.
The SWAT team will try to smoke us out with some T.G. for not wearing an obedience muzzle (mask) and we will enjoy it.

Ah, I remember this gig so well, especially the joke at the start.

Read about it here in Roger Quail's blog.

Again, here comes the CD version from the remastered Box Set TG+ , Chris Carter did the remastering himself, by the way... It is again a binaural recording using a dummy head with microphones in it.
The CD:https://workupload.com/file/c7bJrSUdG9n

Sorry i made a mistake in my last comment, but here is the CD version of the Sheffield show, i mixed it up with the London Lyceum show...
The CD:https://workupload.com/file/CHXCWpJ39ef