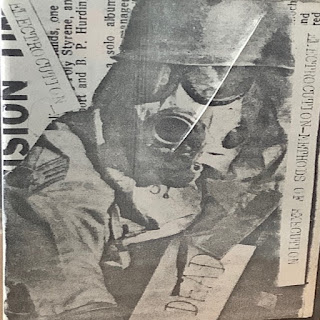 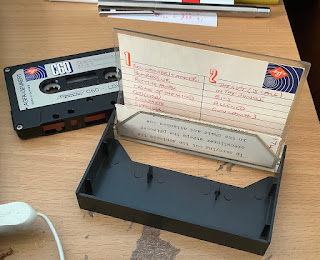 Yeah, the bitter hack who wrote the above article,rather than the bitter hack writing this blog,doesn't like inclusivity,which was basically what releasing your own tapes was about. Aparrently you can't make your own music unless you've been given the thumbs up by the Rock establishment; and the fucker even dissed Danny and the Dressmakers, which is an unforgivable sin in these 'ere parts.

BUT....I see what he's getting at about the tiresome predictability of those who would dare to walk in Throbbing Gristles' footsteps in the snow,alas, for me, TG never sounded as good as this tape. TG sounded as if they had been recorded in Pink Floyd's studio, Brittania Row wasn't it, where the kids fav's Joy Division did 'Closer'.Methods of Execution has all the audio qualities of being recorded in a public lavatory,under the uncharted waters of a blocked U-Bend. Whenever any actual instruments appear, the protagonists seem to have never seen one before, nevermind know how to play 'baa-baa-black sheep'. That particular Black Sheep certainly doesn't have any wool,as its all been taken to create the muffled ambiance of these decaying industrial escapades.  Tim G. Owen (where are you now file contender), the fanzine journo, scoffs at the prospect of Industrial Urban Decay in Peterborough,where Methods Of Execution hale from. Admitedly Peterborough is a very 'new' kind of town,and not rife with the sprawling ruins of the UK's Industrial heritage, but is that what it's about? There are plenty of Rappers,and Urban artists who come from places like Cornwall, and Welwyn Garden City,which is indeed laughable,but you don't need factories to have an angle on Industrial Culture.It's about the Human condition,systems of control and the horrors of reality; these are the same for anyone,anywhere, yes,even in Milton Keynes.

The tape itself, in a series named after....you got it...different Methods Of Execution, is classic early -Cabaret Voltaire style muffled DIY electronics,abundant in found dialogue,Tape collages of Nazi speeches and that over-used "Horst Wessel Lied" marching song crops up yet again. There was a moment when a tape of someone like Irma Grese,the Hyena of Auschwitz (don't you just hate those stupid nick-names that war criminals get given?),shouting beyond the top of her voice for some unfortunate camp inmates to "RAUS"......one shamefully found this disturbingly exciting in the worst possible sense!......or was that a quote from Kenny Everett in character as Cupid Stunt?..we'll probably, never know?

I like how the fanzine guy takes them to task over "Auschwitz chic" and regards TG as being above that. Weren't exactly the same charges laid against TG in their day, right from Zyklon B Zombie onwards?

Wonder what the writer would've made of Buchenwald by Whitehouse... I see Bennett's been given the Vinyl On Demand box set treatment now, with the Himmler speech cut from Für Ilse Koch and the Liebstandarte references gone. Not airbrushing his own history, surely?

Bennetts revisionism can only be explained away as wanting some dosh.He seems to be shipping an awful lot of his reissued albums I notice on facebook. He's always been polite with me,asking nicely for me to take down any come org stuff. In fact he's the only one who had any manners (including Chris and Cosey who e-mailed me a letter from their Lawyer!?...thats a laff!),so I can't slag him off too much, despite joining public enemy number one's VOD label. I may make all the stuff they left off available on here,so as not to distort history too much.
Indeed if the fanzine chap had any problem with Nazi Chic, then he would have to disown Joy Division, A Certain Ratio, March violets etc. I guess he didn't get it, from the other extreme of not getting it?

I imagine Himmler and a couple of other things had to be excluded from the Come Org box because it was released in Germany.

Yep, pretty much what the folk discussing it on Discogs assumed.

@JZ if he keeps his "Susan Lawly Legacy Editions" going as far as Right To Kill this time, I'd buy that in a heartbeat. Wonder if he'll do Psychopathia Sexualis digitally too, as it was finally remastered (from vinyl) for the box.

Ilsa from Buchenwald is the proto-Karen. The Dead Kennedys had a blank side two with In God We Trust, Inc. cassette with the caption...home taping is killing the recording industry.
I still have the when you pirate mp3s you're downloading communism pic and it makes me laugh every time.
Manboons is so funny when he tries to build a utopia when it is more fun to just kick back and enjoy some musiks.

P.S.-do you have any Women Of the SS aka John Zewizz?
Just be evil Goog doesn't care so don't be afraid.

Yes Adolf Satan, just do a search on the blog, or find their tag in the labels list...plenty Women of the SS and some John Zewizz's other project...sleepchamber wassit?.He's even left some comments asking me why i've been so nasty to him.....i mean just look at him,he's asking for it.

Tim Owen, member and collaborator of various Sheffield bands in 1980, studied right wing white nationalist parties, and has been a sociology lecturer for decades.

It might be common knowledge by now, but this was Allen Adams from The Destructors. He did loads of tapes like this, I think there was one every couple of months or so. The plan was to put the best tracks on an album one day, but I would guess that never happened.