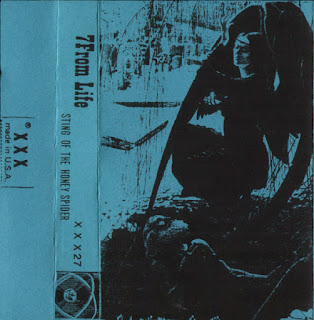 He had the name of a Porn Star, and the looks of a toilet cleaner, but Lawrence Van Horn's recorded output is probably the best stuff on the Inner-X-Musick label.Another from the Nurse With Wound sonic collage school,who had in turn nicked it from former 'Homosexual' Jim Whelton,and his various terminally obscure cassette releases; the most well-known being L.Voag. It turns out that NWW had appropriated virtually everything to make their first album,and i'm sure Larry uses the same time-trusted method with his sound sources.
To blot his copybook a tad, Van Horn was in several line-ups of the not-so-good,and very dated sounding, Sleepchamber,but don't let that put you off.
Tracklist:

I'd be interested to know the sound sources for "Chance Meeting," to me it sounds as if there's much less of that kind of thing on that album than on their later ones. More as if there were some instruments lying around in the studio and they had a go on them. But I could be wrong.

I'll have to send you my own 16-minute adaptation of the theme from "Law & Order: Special Victims Unit." (Not a joke, it actually exists.)

A Sting In The Tail said...

Bwahaha! What a review. I laughed. Thank You.
You have to look out for the webs when out for a walk.
Spideys stretch them out across the path.
I try to walk around or under.
Before the state cracked down a bud had cobras, scorpions, tarantulas and it was fun to feed them.
Nature is undefeated and will never lose.

@ philip johnson, you're right,i do remember stapleton saying the very same..instruments were used at least on the first lp......but the NWW canon as a whole...very collage-y.
Of course i expected a 16 minute Law and Order theme adaptation to exist..We were all hoping foe it.