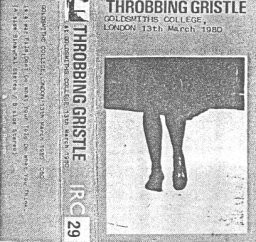 TG return to Goldsmith's College,only a few places allowed them back for a second go,to introduce the kids to an abstract version of their recent hit Heathen Earth LP.Group tensions were brewing,as always in any creative environment,and these tensions were certainly transferred into the music by the sound of this appearence,full of Noise,and awkward silences.

The lesson to all creative persons with an ego out there is, if you want to gift the world your vision, your genius, then don't form a group;a form of behaviour that seems to be restricted only to music.A movie has a director,paintings are generally made by one artist,but music seems to be blighted by having too many chefs in the kitchen....go solo,or pay them so they do what they're told, not what they think....not that this happened in TG however.It was mainly centered around the breakdown in personal relations between GPO and Cosey,who was now in a relationship with Chris Carter, the Tony Banks of Industrial Music.The Fleetwood Mac syndrome...but not quite as bad.I think they all shagged each other at least once in the Mac....very unsavoury behaviour indeed.

Ok then,which one would you sooner have a go on?Stevie Nicks or Cosey Fanni Tutti?.......so much for in depth artistic analysis kids?...or for heterosexual girlies, Genesis, pre-op Orridge,or Mick Fleetwood...jeez that's a tough one?

Cosey cultivated a very specific look, like out of a French pornographic film scored by Klaus Schulze ("Body Love," for the record)--or even one of Jean Rollin's non-porn films--where as Stevie Nicks just looks like someone I went to high school with--blehhh.

So has it been settled--is Cosey _definitively_ the Phil Collins of TG? If I find out that she's royalty, like Lalla Ward, or something... it's just too much.

Attend UNI and see T.G. Today you might see Ariana Grande at the Taco Bell Arena on the grounds of diploma mill state.
Found all the "studio" albums and live is much better even in 1980.
Thanks for single tracks versions where most online DL's of these shows are chunks with no cue file.

Stevie any day, and all day!

I would go for Stevie myself after half a lager, but suspect that Cosy would be rather more adventurous in the sack...but she's a two pinter,so it'd be too late for me,i'd have been with Nicks one and a half pints ago!...life's so unfair!

Yep she is the Phil Collins of the group alright.....but remember Collins did tread the boards of London'e theatre land as a youngster, so maybe he's the Cosey Fanni of Genesis,rather than the other way round?

If you lived in California for any length of time, you've met too many women that wanted to be Stevie Nicks. If your idea of foreplay is to light a roomful of candles that may at any moment set alight one of the innumerable curtains and tapestries drifting in the evening breeze, then have at it.

I don't want to make a big issue out of this but Stevie Nicks was seriously rich--her daddy owned Veterans Memorial Coliseum in Phoenix, az, among other things--yet she acted all poor-like ("Gypsy"?!!!). WTF?! And I have no doubt that she listens to shitty music.

Cosey, on the other hand, is proper trash and she's probably listening to something decent right now. ALso, this:

I seriously don't know what the hell is wrong with you people.

And if that wasn't persuasive enough, here's a photo gallery: