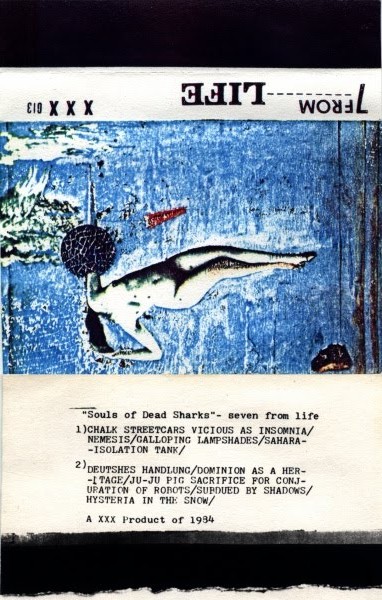 7 From Life was a gruesome looking charaster called Lawrence Van Horn, and despite the name, he wasn't an alter ego of John Zewizz, even though Zewizz seemed to be on the horn most of the time. There's a refreshing lack of pervy sexual references from van Horn,although he is one of those people who actually look like the music they make.He has that Harvey Wankstain bubblegum rolled in cat hair look that most perverts seem to  enjoy.Imagine him and Zewizz on a night out? They'd empty any bar of women within half an hour.Then they could play one of their tapes and empty the same bar of the remaining males within another five minutes.
You get the eerie feeling that if Larry didn't make music like this he'd be one of those characters with a hidden apartment underneath his house, full of kidnapped women and several of his malnourished offspring chained together.
The music is wonderfully creepy,more along the lines of Musique Concréte rather than classic Old Skool Industrial. This could pass for avant-garde if only Larry had gone to a fancy Conservatoire de Musique in Vienna;but I doubt they'd even let him out of the country never mind into another.Especially if his passport photo looks like the picture above.Ugh Shudder!
Tracklist:

Awesome! Have you got "Sting of the Honey Spider", Jonny?

The Man Who Waved At Blogs said...

Gonna go ahead and delete this bookmark now. What with the Mega end of the line now, when you get to the free jazz stuff, it's just going to annoy me.

Thanks for the memories. It was more fun to joust with you some here at the end than it was when I used to just give you shit all the time.

I'd stick around listening to the "noise" while toe tapping.
As long as there is a sample from Robocop I'll buy that for a dollar.
Wymyn get the sads/mads when you just ignore them altogether.
Bwahaha! Damn it feels good being a complete shit heel.
Someone has to do it.
I'll unpack this on the offline machine and listen in the dark for shits and giggles.

You want the Honey Spider Anonymous? You got it.

"The Harvey Wankstain of Industrial Musick" is probably the sexiest description he has ever had.