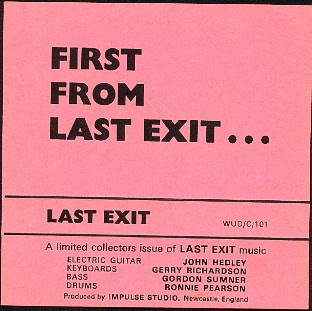 Ahaaaaa!....did someone mention Sting's first band? Indeed, Gordon Sumner got to use the 'Last Exit' moniker first with their depressing,geordie, version of the Average White Band. The Pub Rock shadow of the German American Noise Jazz outfit from a decade later,when the Bass Player (in fact both of the Last Exit's bass players!) was/were,and still are,enormous pricks. This says more about the origins of 'Punk' than any forgotten, "we got there first man" punk before punk groop from Boise Idaho that gets discovered every year. This represents what an awfully dull and depressing hole Great Britain used to be in 1975,and its main protagonists wern't necessarily all in search of the re-birth of rock'n'roll. 'Bandwagon' was a word oft-used by 1978, and sting was indeedy accused of this common behavioural pattern;either that or he had his eyes and ears open for something better? The early Police were a great band,full of ex-proggers ,looked good sounded good,and had eff-all to do with the London based clique that became 'punk Rock'. Sting often relayed a story about when the Police were bottom of the bill at the second Mont-de-Marsan Punk Festival in 1977,when he popped his bleached blonde head in the Damned's dressing room,and humbly asked for a Beer,the response to which was,from Rat Scabies I believe, "Fuck Off and come back when you're as famous as us!"....oh how Ironic.This brings to mind tne old showbiz addage to 'be careful who you meet on the way up for you will surely meet them again on the way down'.

I actually enjoy listening to this tape believe it or not? This Jazz rock bland-out transports one instantly back to a time which is often accused of being the worst year ever in Rock Music....which is crap.For a start every year ,virtually since ,i'd like to say 1988,but its probably since about 1999 is the worst year in pop and rock music. Sting's Last Exit is a fine example of the kids doing it for themselves in the height of the 'Pub Rock' phenomenon, which had far more influence on those original spikey tops than Iggy Poop.

Don't worry, i'm not gonna post a load of Police rareties,I feel a duty to amuse as well as bemuse.

For me any musical virtues the Police might have had were occluded by Sting’s awful Bob Marley swipe voice and his excruciating lyrics. They have possibly the stupidest lyrics of any big successful band ever, compounded by Gordon’s evidently thinking that he was an intellectual, getting his album title from Arthur Koestler and namedropping Nabokov (with a line that suggests he hadn’t actually READ “Lolita”).

What’s Rat Scabies doing these days? I could imagine him turning up on Celebrity Big Brother.

Chris Miller?...he cropped up presenting a TV history series,i forget on what subject,must google it..... believe it or not?

Really? Among all those facile bands like Kiss, Bon Jovi, Van Halen, etc., not to mention every syrupy love song composer ever - Sting is worse than all of them? Methinks you exaggerate. Or perhaps you're just parroting that haughty article in Blender.
https://web.archive.org/web/20071218185917/http://www.blender.com/guide/articles.aspx?ID=2886

DAMN YOU JONNY Z! I log on and see Last Exit and think, YES!--a heretofore unknown studio or live outing from the greatest supergroup ever assembled, Brotzmann/Sharrock/Jackson/Laswell!

Oh wait. ARRRRRRRRRGH! Different band altogether, and featuring no less than that self important artiste whose image on a poster at Royal Albert Hall got Paul Weller cited for spitting upon it and muttering (accurately) "fucking twat".

I can't actually remember a single line of any Duran Duran lyrics, whereas the Police's hits are studded with dumb lines that stick in the memory - which I suppose is a sign of their being more talented musically.

On the other hand there's no excuse for getting your album title from Carl Jung.

Oh Yeah...Rat Scabies was in search of the Holy Grail, that was it. Lets hope he never found it eh?

@ Ian.....i'm not posting no more last exit...its that guitar player(s), but as for misleading you, bring on the litigation, i'm a slippery customer when it comes to legalities. I know my lefts.

Love it. Now I gots to go and track me down some of their other outputs.

As always, much thanks.

why do you say Bill Laswell, one of the my two preferred bass players (the other being Bootsy), is a prick?
I wanted to include Johnny Zchivago, Doctor Zivago, as the third, but if you slag off Bill, i need to retaliate!!!!!

Lilith, don't you love me no more? I would have thought i was number one Bass Player on most lists.
There was a lot of support for me dissing Laswell among the commenta on last exit ,painkiller etc..so i feel justifoed, but he was in lots of great groops.
Yes i'm under house arrest too,but we are now allowed to travel 20 kms without having to justify it.
Its like some dustopian novel innit?
JZ x