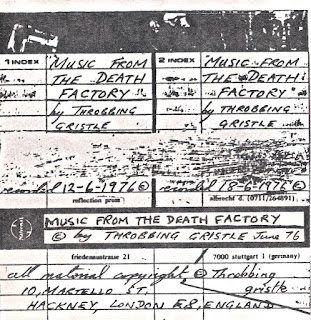 As Throbbing Gristle were mentioned in the "Methods Of Execution" post,and It has been pointed out that a gaping hole in my online TG collection existed,so here we have music from the year zero of Nazi-Chic; the Death Factory being a thinly disguised reference to Auschwitz-Birkenau I guess.It being a...woe back off boogaloo!....controversial opinion warning......a gas chamberless,but very brutal, Labour Camp, with an out of control Typus epidemic, that no end of Zyklon B Giftgas,could not control. The 'Gas Chamber that you Nazi-Obsessed tourists look suitably sad in, was built by the Soviets in 1948 as part of their de-nazification program (not pogrom).This has now been conveniently brushed under the novelty cash-in-able atrocity carpet, and is never mentioned on those obscene guided tours that help turn over the cash for the local Polish oligarchs. If there isn't one already, they should be an Auchswitz gift shop...or should I say 'Gift-gas(german for poison gas)' Shop(?) providing stripy T-shirts,Astrays with certified Auschwitz Ash provided, Mugs (that's you), Oven gloves, and other novelties......may I suggest cuddly Josef Mengele and Irma Grese dolls,wow! I'd even buy a pair of those.! I had an idea to make atrocity based Snowstorms, and Auschwitz was gonna be the first subject.....I think they'd go down well; just waiting for the 'Giftgas' Gift Shop to open it's oven doors to the public. Anyway, who could possibly do without a pair of Auschwitz Ovengloves?......Its a pity they don't hook up that fake gas chamber with some real Zyklon B and offer the full experience for the tourists,who act as if they wouldn't have been a campgaurd if Hitler had ordered them to do it......'No not me' they say....'I'd have chosen the Russian Front'...like you had a choice?.......Awwwwww lighten up for Jehovah's sake!!!.....and don't go to that despicable Nazi-Disneyland, its a scam!.....this kinda talk gets one locked up in various EU member states;just like we never fought a war against totalitarianism at all. Freedom of Thought?..ok,but,whisper it quietly.The Brain Police are still out there.

Throbbing Gristle missed out on many of the the promotional aspects of Holocaust-chic, no 'Death Factory Ovengloves, for example.....BUT, they did plenty of live and in rehearsal cassettes with death camp....and lobour camp, references. To give them their due respect, TG never really flaunted this angle as something worthy of that commercial catalyst, 'Shock Value' , or court controversy deliberatly......it was 'Art' man. Never forget this lot came out of the post-hippie morass, and had obviously heard a lot of Kluster and Tangerine Dream. Krautrock copyists,however, they were most certainly not. That British talent for turning anything into subversive entertainment rather than just an art pose is legendary.Like the endless debates of 'who done punk first', who done Industrial first was...well.in its original form...either TG or Cabaret Voltaire, with a bit of inspiration from William S. Burroughs, and Kluster. Totally unique stuff for 1976.How 'Rock' got involved I dunno.....Industrial Rock is for Arse Lickers.

DOWNLOAD then go and burn all your books on the third reich HERE!

My speakers are thanking you right f'n now.

Boogaloo! Thoughtcrime detected. Comrade Kommissar Karen will be by to collect a urine sample for the good of the collective.
All the furor over der Führer as we go through the great leap forward redux.
Only the music can save us now.

Sorry I drank my Urine sample stock this morning.It had a slightly bitter aftertaste,but i'm now feeling the benefit.

The fascist lockdown is worse than living in Nazi held Europe, same bastards who gave Hitler money, US/UK banks are the ones who always profit during wars, recessions, and scamdemics.

Picture of the Russian built crem chimney NOT attached to anything:
https://furtherglory.files.wordpress.com/2014/03/auschwitzchimney.jpg

The coronavirus hoaxers are still the same people who own over 90% of the media, Rockefeller's companies Vanguard and Blackrock, and almost ev'rything else including pepsi and coca cola, mac and microsoft, big pharma, etc - if the BBC was really independent, why are we paying a stealth tax licence fee? History is indeed written by the winners, 'tis a pity they're all liars. History is bunk.

You mean well, but sometimes you just blather on too long.

Simple bottom line on these :

Of historical interest? Yeah, sure, a little.
Pretty boring to actually listen to? Yeah, pretty much.

'Blathering on' is something i am aware of Anon.Just entertaining myself.

It's that boringness to listen to that is so hard to find these days.
And the blather is entertaining me, too. If you love Italian food, don't go to a
sushi place and complain about the lack of meatballs and Parmesan.

I concur northfieldhat, boringness is sometimes far more subversive than shock value or excitment. Bring on the bore-wave you youngsters.......oh wait they already did it....Hip Hop they call it.

TG is the most overrated thing in Industrial music, and GPO was an opportunist ,a women beater and a terrible person. Fight me.