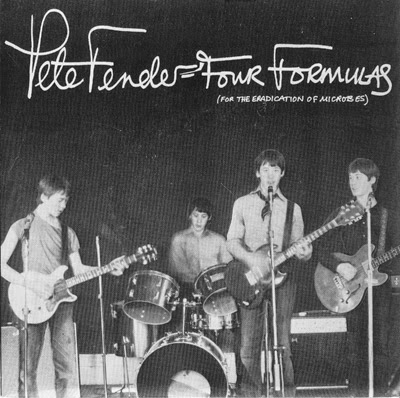 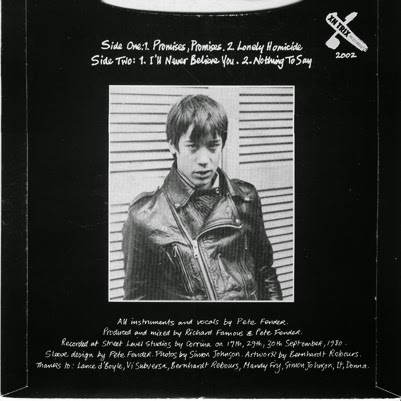 As far as child groups go,punk rock gave us Eater, The Prats, and The Fatal Microbes.All excellent combo's,but the band that produced the best kiddie-punk tune was The Fatal Microbes, with that unforgettable anthem of youthful disillusionment, “Violence Grows”(mp3)(just beating “Inverness” by the Prats?). Oh my god, they told the bus conductor to “Push Off” when asked for their,half price,bus fare! How charming.
I had the fortune to inherit this record for 10p from my violent mate(he made me be his friend!), who jumped the Punk Rock ship for a sicking Northern Soul obsession in 1978! I could only play one side because he had glued it to his bedroom ceiling for its aesthetic effects. This way I had a small collection of one-sided indie punk singles for around a quid fifty; not bad.
But I digress.
14 year old Guitar Player for the wonderful Microbes(youngest member 12!?), was one Peter Fender(which also included under-age sex siren Honey Bane on vocals; apparently this was all legal in the seventies!).
Post-microbes, Fender went on to the sartorially awful Rubella Ballet, to compete with that other Ballet, Spandau, as the worst dressed bunch of wankers in Pop.
Inbetween, now 16 years old, Peter went down to Fuck Off Records HQ at Street Level (on the 17th, 29th, 30th September, 1980 incidentally), and knocked out this Buzzcockian spiral scratch knock off;alluding to the fact that he wanted to erase his previous band from his C.V. ? A charming buzzsaw power pop collection it is indeed, but not in the same league as his previous group i'm sorry to say......now.......”PUSH OFF!”

Don't remember this single though with my memory these days that doesn't mean much.

I guess having a mother like Vi meant they were never going to turn out 'normal' and it did make a change from the black combats (a look I still haven't grown out of some thirty years later) - actually, live they were pretty good and amazingly, they still wear the same look all these years later - check out the documentary "woman in punk" from three or four years ago and they are interviewed.

Out of all the anarcho-punk tracks, Violence Grows is my favourite and it still sounds incredible decades later.

Jesus, I forgot I had already made a comment on this post two and a half years ago under my kosmikino account - the recent Honey Bane singles collection rip you posted made me think about this single - well at least I cant be accused of bandwagon jumping as I have already named Violence Grows as my favourite 'anarcho-punk' ditty (with The Mob's No Doves Fly Here and The Subhumans From The Cradle To The Grave and the entire RP Death Church album in close competition).

Have you left any comments on my Mob posts?
Is it me or is 'No Doves Fly Here' kinda cute?..its his poor little wavery voice.....The Robert Wyatt of anarcho punk.
Didn't like the Mob when they were first around, but now I often find myself playing their tunes an awful lot for 'Pleasure'???
Does this mean they were ahead of their time, or was I behind the times in '83 or now?....probably both...and why not?

I resisted posting any comments on your The Mob's posts as they were my favourite band back in the early eighties and my fragile ego (and Let The Tribe Increase album cover tattoo which sadly looks like it reads The Mod some 30 odd years later!) couldn't read any scathing critique - so I'm glad to hear you are re-appraising them - No Doves Fly Here is their opus maximus - it was that fragile warning Robert Wyatt quality that I loved as a teenager (and perhaps why, more than any other band, they were the most popular with anarcho-punk chicks - just made me think of that Hagar The Womb track Dressed to Kill - now there's an unsung anarcho-punk band and just checked and there are a few YT videos including their wonderfully amateur Peel session from 1984 but I digress)

Behind the times - ahead of the times - luckily it's all collapsing and as Uncle Bill ultimately prophesied: 'the only way out of time is into space'

Like the vague tattoo spelling...it reminds me of the misspelled note in Woody Allens 'Take the money and Run'.....'This is a stick up,put twenty thousand dollars in the bag; I have a Gub.'

Actually, your comment about vocalist Mark Mob being the 'Robert Wyatt of anarcho-punk' re No Doves Fly Here is so spot on that I had not even realised the comparison myself - especially weird given Robert Wyatt is one of my most beloved artists - his music perfectly spans my taste - from that weird European 1981 Radio Experiments (or something like that) via Yesterday Man to Biko and of course where it all started for me: Peel playing Shipbuilding....but i digress

Yes, it does make me smirk with my eons old Mob tattoo transforming into The Mod... I do smile at those 'illustrated teens, - thinking, just wait till middle age hits and those elaborate and expensive tattoos fade and merge into an abstract flabby blob of ink (that will teach them for their being nothing but passive collaborators of cultural capital and shite music)... And on that note, back to listening to the Shangri-Las wonderfully titled compilation Myrimidons Of Melodrama (current favourite listens - alternating between that and one of yours, the Komonvari64 rip - what a discovery, I'll be no doubt droning on about that in the comments soon!)