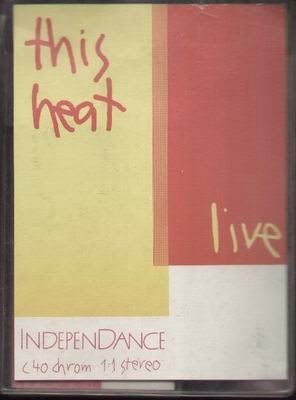 Next is This Heat from 1980, live in sunny Krefeld;an industrial German town twinned with even sunnier Leicester (UK). I'm sorry to say that my Father was partly responsible for Bombing the fuck out of Krefeld during World War Two; probably killing innocent women and children. For which I humbly apologise for on his behalf ,as he's obviously now dead(but alas unapologetic for his role in British revenge attacks on German civilians;ah well eh?).


But, one good thing the British did for Krefeld is send This Heat to do a gig there. If that doesn't make up for the terror bombing of the nineteen forties then I'm at a loss to think of anything that does!


This band is fucking brilliant, and thankfully we get a top quality sound-desk recording of this top quality performance. There's even an unreleased tune; a captured moment of something unspecified,is it an improvisation or a rejected composition?

Firstly, you have one of the truly great sites of all time...that you already know. What you might not know is there are tracks missing from this download....
All the best....

Hi Zy, firstly thanks.Secondly you are right!I'll have to solve this unforgivable cock-up!
Cheers,
JZ

Indeed, an amazing band.
Thank you!

Thank you Deocliciano,you are by far the most grateful commenter on this blog.Thanks for being you.
JZ

Secondly, thanks for the other tracks....Thirdly, if I haven't got time to listen to the music I just re-read your intros/comments which will do in the meantime....brilliant... and yes, can we have This Heat back please....not as rehashing nostalgics but as more experienced versions of what they were.... now where is that universe where these things happen??....

Dear Mr Z,
my uncle from England used to tell me that the first time he ever he ever heard of my hometown was in his childhood when it was mentioned on the radio as just being flattened by the Raf. Decades later he would have a german wife and her family as regular guests. He found that remarkable and hopefull for the future, but i think he probably would be a bit disappointed by the present. Oh, and you forgot to send This Heat over here to do a show, but thanks to your enthusiasm we all can enjoy these gems by now, thanks a lot!

And what is your hometown Herr Anonymous?
We could send Scouts of Uzbekistan over to do a show instead? as This Heat are long kaput!
Uncle Z

It is a sunny place(cough, cough) called Essen and please let me know when it is going to be honoured by the Scouts' presence.
Herr A

Yeah, i've heard of Essen;studied that area in geography at school,Ruhr Valley isn't it? Yup, my late father did a couple of bombing trips there too, so he apologises from beyond the grave.
The scouts will be coming when the drummer recovers from his latest bout of schizophrenia.