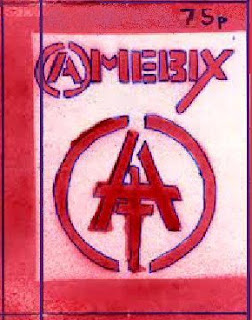 That's an Anarchy sign innit Tee Hee giggle!....radical...or do I mean Ridicule?
Early Anarcho-punx with a shit name,and probably one of the few groups ever to have a member leave to become a sword smith !?
This cassette has a classic UK DIY sound, like it was recorded in a cardboard box using tin cans and string for microphones.
I am informed that they went on to be acclaimed as the Godfathers of Crust Punk, whatever that entails? Probably playing 'Punk' in unwashed clothing with no fixed abode I dare say.
No too sure what the feminist vegan Anarcho-punx would have had to say about a thirteen minute song entitled "Disco Slag", but they make up for it by having another song on the popular subject of rabies ,as well as a obligatory ditty about how the original Punks let us all down...ahhhhh.
Not too familiar with their other,later output, but this one's good.
Shit-fi with inaudible pubescent preaching with just the right amount of stupid to make it listenable.
"We're not Nihilists we're Anarchists!"
No idea what the band name means.....don't wanna know either so don't!....maybe its to get their future recordings towards the front of the soon to be swelling ranks of the "Anarcho-Punk" section in yer local disceterie but they split up several times only to come back to massive,three figures and more, festival crowds in Europe.....they'll watch anything over there.Especially after Brexit and No British bands can get a working Visa easily no more.However, i don't suppose bands like Amebix bother with such formalities.Them being Anarchists an' all?
It's ironic that both Brexit and Amebix both sound like some awful breakfast cereals designed to keep yourselves regular.Just listening to this tape would likely be enough to empty even the most constipated trustfund crusty hanging around the shit pit at many a peace convoy festival back in the day....hopefully before being beaten senseless by a British bobby at the Battle of Stone'enge.
Tracklist:

DOWNLOAD with the aid of amebix HERE!
Posted by Jonny Zchivago at 08:43

... you forgot the dog on a string

early Amebix is ace ... unwashed trustafarians are not

Amebix's subsequent history and output is fascinating. The group that formed in the aftermath of Amebix's last incarnation (Tau Cross) is interesting as well! Early live recordings may still be on the Kill Your Pet Puppy Blog.

Loving this! May we please have Track 01 as well?

...and you also forgot to mention that sword man is one of your beloved holocaust revisionists...

Do you happen to have any material by Wayne Butane in your collection? I know I've asked this before, but I'm very much desperate to obtain some of his brilliant material, if that's at all possible

sorry puppy guts will re_up with track one later today

Rob "The Baron" Miller shit the bed when he thanked a noted holocaust denier on the sleeve notes of the 3rd (and subsequently deleted) Tau Cross record.

@ollie...indeed its no funny business being a Holocaust Denier these days,or even a revisionist, post David Irvine's prison sentence....rather ironic punishment.The fault lies with all the data twiddling the aliies did post war to help de-nazify germany...they forgot to denazify France,Hungary,Ulraine and Poland however....and to reate support for a Jewish homeland....the consequences we are reaping today. Its illegal to say anything other than the standard line in most of europe,punishable by nazi-style imprisonment.So much for future History......PS The Holocaust certainly happened by the way,just the gas chamber part seems to have been meddled with somewhat.....so I'm Not a denier just in case any hero wanted to say anything along those lines...a medal will be waiting for you somewhere.

Dear Penis.....wasn't that a song by the post-Eno Roxy Music?

In fact here's the link to Wayne Butane's "Imbalanced" :

I've got five Butane's but didn't have that one ... I've got two or three comps that he was associated as well. Probably should get around to posting them.