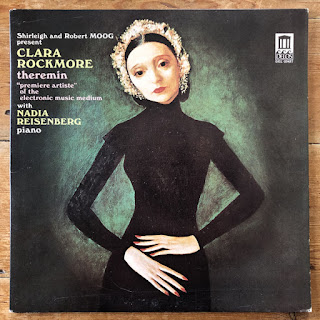 The first electronic instrument was ,of course, the Theremin, as created by Russian inventor,and Stalin Prize winner, Léon Theremin in 1920.Originally he called it by the less egocentric titleage of "The ætherphone", which I kinda like? A musical instrument for the modern era, as it involves no physical contact,and is therefore free of viral transmission drawbacks.It was also the result of Soviet sponsored research into proximity detectors....so electronic music is another thing we have to thank Communism for it seems?
Theremin also invented the drum machine, before he inadvisedly returned to the USSR in 1938.....some say he was kidnapped by the NKVD, which would explain a lot.
Anyhow, he had a glad eye for the ladies, and despite being turned down for marriage several times by the Lithuanian object of his desires, Clara Reisenberg became his Theremin virtuoso prodigy,and proceeded to tour america from coast to coast hulking her clumsy theremin around with her during the 1930's. She married into money,hence the Rockmore name, and continued pumping out a bunch of wobbly creepy classics to the public for fifty years or so,finally getting into a recording studio by 1977....et voila....this album was released.'Haunting' is the adjective frequently used when the Theremin is involved,and by jiminy it certainly is.Interpreting classical works by Rachmaninov, Stravinsky, and Tchaicovsky....in fact anyone russian it seems, in that spooky portamento style that is the trademark of the Etherphone.Clara Rockmore, although not a musical innovator herself as such, was indeed, the First Lady of Electronic music.
Apart from inventing the Drum Machine, Theremin's other talents included a fancy line in espionage and spying equipment,my favourite being 'The Thing',which was a listening device hidden in a replica of the Great Seal of the United States carved in wood. In 1945, Soviet school children presented the concealed bug to the U.S. Ambassador as a "gesture of friendship" to the USSR's World War II ally. It hung in the ambassador’s residential office in Moscow and intercepted confidential conversations there during the first seven years of the Cold War, until it was accidentally discovered in 1952.
Nice one Leon.

DOWNLOAD these wobbly classics HERE!
Posted by Jonny Zchivago at 10:34

What do you think Clara was doing? Spying. And smuggling.

Don't get me wrong - you do you, and all that. And I'm actually getting a lot of other stuff done lately. But it'll be kinda nice when this obscuro chick thing runs its course. The term "for the sake of" seems to be looming larger and larger with each post now. Just saying.

That's a good point L.
I's getting bored with obscuro chicks too,once i start something etc....but i'm now moving onto obscuro male early electronica, so that may test your doing other stuff capabilities for a day or two maybe?

Whoa, I thought 2020 was going to be the year of the electronic woman here at Die or DIY. So what's next then? Dudes? WTF do they know anyway.....

Here in the states for the past few years, right-wing nut jobs have been obsessed with what they call "The Deep State." Wooooooo.... I think the story of that bug concealed in the US ambassador's office in Moscow is all one needs to know about how 'formidable' the deep state really is. The only thing more charming than our withering bigotry is how feckless and easily manipulated we apparently are.

The Huebner disc could have been part of your speech records posts, so it's an outlier, perhaps. It is like that Kluster disc which is easier to listen through because for me, it's in a foreign language.
Those posts of female artists were excellent and not sexist. Their music is good "even though" they are women!

@ northfieldhat...it could and should have been in the spoken word section,but i forgot about it,luckily it had electronic backing from lady,so it fit in here too.
You're right about Kluster....i've read what the narrator was talking about on those albums, and its some religious shit,so wouldn't have sat well with me. If I heard a german voice i thunk 'NAZI', so thats what I see in my mind when i play the early Kluster stuff.The voices are talking about degenerate jews and intellectuals for me, not boring old god.