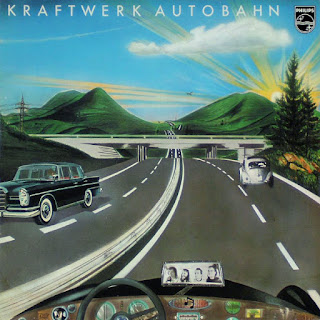 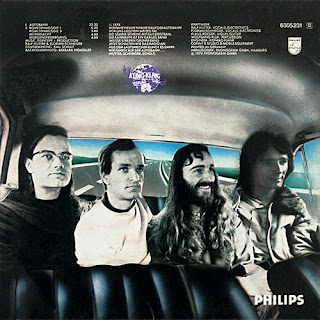 Afika Bambatta says he heard Trans Europe Express and blah blah blah. Well, Trans Europe Express was basically a remake of "Autobahn",using the same mechanical electronic rhythm to suggest travel by various horseless carriges. The darker side of it all is the Trans-Europe Express as the Iron Horse that sped jews to their deaths thirty years earlier via Auchwitz and the semi-mythical Treblinka.
A theme also explored by Steve Reich's 'Different trains' was it not?(The minimalists also had a great influence over all this repetitive German music too don't forget). It helps that Kraftwerk had a better image in 1974 than their later showroom dummies period,when they looked, basically, like Nazi's.
"Autobahn" is also the album that inspired the UK proto-synth popsters like The Human League,Ultravox,but not apparently Tubeway Army,who insisted that he(Gary Numan) had never heard of Kraftwerk.
The reason this album was Kraftwerk's most influential was because they performed this on primetime BBC popular science programme,Tomorrow's World;which also incidently was broadcast in the slot before Top Of The Pops on a thursday evening.Just when the uk youth were sitting in front of the idiot box. then they had Delia Derbyshire's Doctor Who Theme to absorb every saturday tea-time.
Because of "Autobahn"s sucess, they repeated themselves with the next album....so much for experimentation then fella's?
The obvious 'Synth-Pop' album was "The Man Machine", which came out the same time as The Human League's own version of Synth-Pop 'Being Boiled',so that can hardly be called the first Synth-Pop album either.Then Gary Numan appeared at slightly later in the day,claiming no other influence than...yes....Ultravox!Whose 'Systems Of Romance' album of the same year was very synthesizer based.
Personally I prefer the early Kraftwerk,Krautrock period, from 1970 to 74, but you have to admire the beautiful glacial but phat and warm synth noises they committed to tape from 1978 to 1981. "Computer world" was their best synth-pop album,but in 1981 everyone was doing it by then.The year of Human League's "Dare",which involved much more danceable beats and no-one dressing up as silly Robots.
The most influential part of their canon was the compact portable tech.That's what Hip-Hop took from this honky music. And the less portable,but syncable tech is what influenced the producers of House and Techno,that, and the small matter of Georgio Moroders "I Feel Love".....technology has a lot to answer for!
By 1981, Kraftwerk had ran out of ideas,in fact, by 1978 they had ran out of ideas.You could have found most of their ideas in the works of Tangerine dream and Klaus Schulz anyway,mostly from before "Autobahn".
Alas, as a piece of prime late period electronic Krautrock, this holds up as the missing link between the Berlin School and Gary Numan.....who was also a major influence on early Electro and Hip-Hop.
Kraftwerk...Good...but not that good.
RIP Florian and Kraftwerk.

The Voice Of Energie said...

Simmer down, big fella. You're gonna pop if you don't watch it here lately. Have you a nice little morgenspaziergang tomorrow and stop and smell the daisies.

You bite your tongue! But point taken, not as outright original as billed.

@ Voice of Energie....1989..that was when The Kronos Quartet recorded it yes.

Always good to destroy myths but then you should have good arguments.

"The darker side of it all is the Trans-Europe Express as the one that sped jews to their deaths thirty years earlier to Auchwitz and the semi-mythical Treblinka."

What are you making up here? How would that be possible when the "Trans Europ Express" (without "e" or "a" btw) was built from 1957?

"Because of "Autobahn"s sucess, they repeated themselves with the next album....so much for experimentation then fella's?"

Well, firstly there was the very different "Radioaktivität/Radioactivity" in between, so it wasn't their next album. Then, please tell me the similarities between "Autobahn" and "TEE" other than it's about the subject "transportation"? Musically, I can find none, apart from "electronics" and "repetitive patterns".

"by 1978 they had ran out of ideas" ... Just because they didn't invent a whole genre with every album? Their albums are all so different that they display more musical and technical ideas over their career (even after 1978) than 99.9 % of all musicians do.

"Then Gary Numan appeared at slightly later in the day,claiming no other influence than...yes....Ultravox!" Guess by whom John Foxx was clearly influenced and inspired? So Gary Numan was too, if only indirectly.

What you absolutely neglect is the fact that they wrote quite a few strong, interesting and timeless (!) songs. Now show me only one by Tangerine Dream or Klaus Schulze (the latter being the most overrated electronic musician of all, imho).

Another thing that's absolutely missing here is their socio-critical lyrics and their view for the future. Who spoke of computers in 1981??? Noone thought back then that they would have any importance; that started to happen five years later with the invention of the Lisa and became true only 10 years later. Same with the issue "Robots". They had a strong message, too!

Yes, they may be not as good as is claimed today. But better than you wrote!

That Tomorrow's World clip was repeated so much I must've seen it on TV two or three times in the 90s - still looked and sounded amazing. Wonder what viewers in 1974 thought.

I try to listen to this album every so often with fresh ears, try and remember just how revolutionary it was... difficult to do, it's one of these records like Sgt Pepper or The Velvet Underground & Nico that's become so overtaken by its own mythology. It's not my favourite Kraftwerk album, but it is undeniably one of the most important albums ever made.

For anyone else who has grown skeptical of the assumed brilliance of Ralf & Florian should read this:

Kraftwerk, I Was a Robot by Wolfgang Flur

You might call it sour grapes, but whether you buy into Flur's take on the inner workings of the Kraftwerk machine, it's still a highly enjoyable trip about growing up in post-war Deutchland, and as well as the subsequent burgeoning German pop scene.

Wolfie...come on what entire genre did Kraftwerk actually invent? I know they are pretty well worshipped in germany,but come on.There were plenty of german synth stuff that could have done the same before autobahn.

Contrarian that I am, I'm partial to Kraftwerk's first three albums, you know, the one's they later disavowed and refused to reissue? I still liked them through the early eighties. After that, it all sounded like self parody to my jaded ears.

Indeed Rev.b, early lp's are very good, Robot era is a tad silly,but they had some nice sounds going on there.After 1978 they were pretty irrelevant,and dated. Now it alll sounds nicely trendy and retro,wich is how i like my music.

You gored a sacred cow like a bullfighter of prose

Before Kraftwerk there was ......TONTO 1971-74 recorded before Autobahn This was a duo from the US and 100% electronic/synth based even utilizing the vocoder..So although the Krauts got the fame they where NOT the first fully electronically fetishist electronic band and dont forget Mother Mallards Finest also a US based Moog group(1972?). I thoroughly enjoyed Radioactivity and the pre-Autobahn Ralf & Florian releases much more pioneering and interesting that their later saccharine silicon muzak.

Dear Background Info...maybe you should have got the full version of your name...TONTO were anglo-american.......also its sounds better if the group you liked was called Kraftwerk,rather than a couple of afro-haired dudes called Tonto's Expanding Head Band....not sure if you noticed but Tonto was the post i did before the token Kraftwerk,as well as actually being before Kraftwerk in going totally electronic..which,for Kraftwerk was The Man Machine in 1978,the albums before had some guitar and flute on them....so that was 4 years before TONTO ceased to be,and got the job of Stevie Wonders synth coach.

Hey Jonny yes it was a glitch on Google re: the name. I think except for a sparse violin Radio-Activity was 99% electronic and that was 1975. I did not see your previous post for what ever reason (od'ing on 20 cups of coffee, snorting my last lines coke). Malcolm Cecil did hit the big time working with Mr. Wonder in fact those are my personal favorites of Stevie's catalog. Numan was in a league of his own and quite rightly so his early catalog is his pièce's de résistance! Great blog always surprised what your ear hat magically tuned into.

It wasn't the electronics, it was the monodic-ness. Other electronic groups were
more dramatic, or had some element of soloing involved. Not Kraftwerk. When I first heard the album version of Autobahn with that percussion and noise section which was completely "uncool" in a Tangerine Dream sort of context, it was a stunner for me. Now Ralf's nerdy look made sense. All that was left was to lose the mullet.

@Northfieldhat...you were stunned by the percussion and noise section, but you want the mullet gone!?...how does your mind work?
I will admit they were the first grown ups to act like Robots and expect us to think that was musical innovation in action.
I feel one must make it clear that I like most Kraftwerk,and i think they looked cool....can't beat a bit of Nazi-Chic in my opinion...especially if they're german.

Auschwitz was a laborcamp, there were NO gas chambers at any KZ. None. Krakow university agreed with an US expert that no gassings occurred. There were NEVER 6 million Jews in Nazi occupied territory. Like the coronahoax, the same people owned the newspapers/media then as now, pathological liars. No one body was autopsied and found to have been gassed. Red Cross records have the same number of deaths that the Auschwitz Todtbuch and British spy center had - 271,301. 3.000 babies were born at Auschwitz materity hospital, all survived the war.

Well,you said it Anonymous.All facts that can get the revealer banged up in prison in many european countries....now can you do the same for Treblinka please?'Holocaust Denial' they call it!?
That's all i have to say,to avoid the inevitable finger pointing.