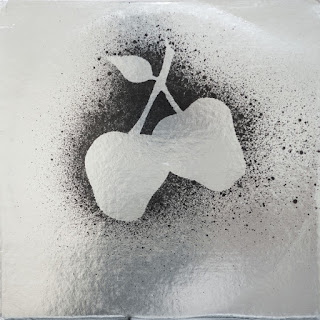 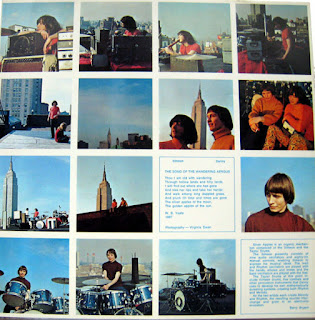 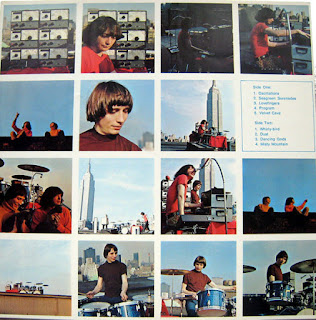 I figure that they got their name from Morton Subotnick's album, via the W.B.Yeats' poem,"Silver Apples Of the moon" released the previous year.
Siver Apples were the very first electronic rock duo and an obvious precursor to Suicide,who began their long career of sonic terrorism a year after Simeon and drummer Dan Taylor called it a day after getting sued by Pan-Am.
Simeon Coxe, the singer and electronicist, made his own proto-synth from a bunch of Oscillators and had a variety of levers,knobs and pedals to control the sound of the box of tricks which he named after himself...."The Simeon".
The persussion heavy repetitive sound reminds one of krautrockers CAN more than Suicide,but the influence on Vega and Rev is undeniable.
The original line-up got back together in the mid-nineties, of which I was much privileged to see perform in a pub in Leicester,uk, around 1998 (at the much missed Physio and Firkin), and got to chat with Simeon after saying that me and my buddy were from the Observer.He was much amused by the fact that I referred to himself as "The Simeon" like his machine was called,but I rather liked the ape-like connotations,as in Simian. Thats what happens when you invite drunken Observer reporters backstage when you don't drink yourself and you have a complimentary crate  of beer just waiting to be drank. I thought Simeon looked rather like an urbane Ozzy Osbourne,with his dyed black long hair and round tinted glasses,but he certainly wasn't as thick as Ozzy. I'm not sure if Windy and Carl,and some Spacemen Three offshoot were supporting that night, or was that the gig they did a year or so before,with the new band members,which wasn't so good.
Sadly Dan died a few years after, and Simeon broke his neck in a car accident. This duo were cursed.

DOWNLOAD the silver apples of the earth HERE!
Posted by Jonny Zchivago at 22:25

Apart from the early duo angle, I've never understood the Suicide comparison. I think they're both their own, unique separate deals.

I have a funny story about both of the original LPs, which I don't really want to get too far into for both space and personal reasons, but I'll say this much - I was around long ago enough where I used to see both of them sit for YEARS, untouched, in second hand shops. And by virtue of that, I made somebody who was around even earlier than me (and many thousands of miles away) a very happy camper indeed at one point.

And now here it is, free and available to the planet (and not for the first time) in mere seconds at the touch of a button. What a weird ass century we're living in.

@Che.....Well Suicide understood the comparison, Vega and Rev are both quoted citing the Apples as an influence.
But it is certainly interesting how groups become fashionable after resting for decades in the bargain bins of taste.

I saw them the year before you, at the first Terrastock festival--here's video proof of the event: https://www.youtube.com/watch?v=mOi3ZNRG6Zw&t=131s

Back when "reunions" of this sort were like a "thing." I played at one (or maybe a couple?) of those Terrastock things a few years later, and there were countless "reunions" on the line-up. There's some sort of contract (unwritten) these days that you have to re-unite every so often to show the world how much, or how little, it's changed. Yeah!

...and, yeah, '97 was the Xian Hawkins line-up. The recordings of that line-up were crap, but I thought they were ok live.

I wonder why it took me so long to check these guys out? Whatever descriptions of their music I had been hearing for so long hadn't exactly done them any favors, (comparisons to Suicide, who are not my thing). But, here I am, listening to their debut for the first time and I'm suitably charmed! Thanks for this! Indeed, I dig the motorik pulse with almost folky vocals... cool stuff!