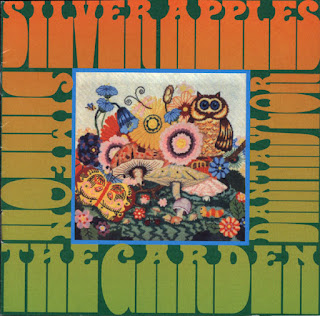 With all the renewed interest in the mid-nineties,not that there was any interest when they were around the first time, The Silver Apples took this opportunity to finish the mythical 'Third' album that they had started to record in 1969,until Pan-Am fucked it all up for them.
Simeon told me that it was "Too Commercial",but the evidence dismisses that claim.It's not commercial at all, just a little bit crap.....but not as crap as those albums Simeon did with Xian Hawkins before he rediscovered Dan to finish "The Garden" and tour Europe.
The Can-like repetition,Simeon and The Simeon's primitive electronics are still there,and so is Coxe's warbling vocals. There's also some ill-advised cover tunes,which I'm sure would have been dropped from the finished LP originally;maybe that was the commercial aspect which Simeon was referring to?
There's about four decent Silver Apples style tunes on here that stand uo to those on 'Contact',even if "Walkin'" starts off like a remake of "You're Not Foolin' Me"....well they're not foolin' me!
Sounding like the kind of bonus disc material which blights every remastered classic album since 1990,this is not prime Apples, but it's still an intriguing listening experience.Especially like the instrumental jams,or noodles as they call them.
Sadly just after it's eventual release, Simeon was put out of action for 5 or 6 years after breaking his neck in a tour bus crash.Athough Dan died in 2005, Simeon is still playing as the Silver apples into his eighties, using recordings of Dan's drumming to augment the one man band aspect.

Thanks Jonny-Love the Silver Apples