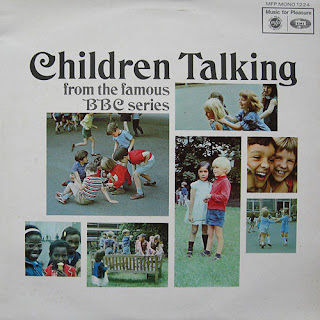 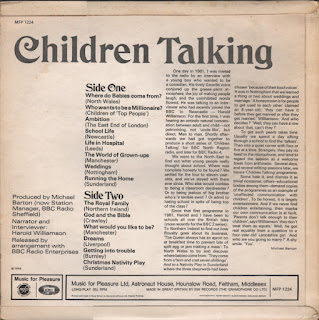 Another gem from the wonderful BBC, the home of 'Fake News' according to the Child in the oval office, is this vintage recording of children from generation X,when innocence still reigned.
This album has been roundly pillaged by Aphex Twin for samples, so here's your chance to find your own.
The wisdom of the 'Children of Top People', is the Das Kapital' of Trumpism. They are not quite as monosyllabic as the small handed pink one, but their politics seemed far advanced and sophisticated to that of the Donald himself.
Michael Barton himself,has the manner of questioning that would probably get more of a civilised response from Trump,with his childrens television style of gentle interrogation.He would be labelled 'real News',until the Trumpster found out he was from an intelligent broadcasting body.He knows that 'BBC' spells DANGER!...or even worse a person with a brain is asking him questions.....panic...get angry!
"Children Talking volume 2" would be contrived of snippets from Trump and his moronic followers answering questions about life's fundamental questions....trouble is it may well be X-rated,and should be avoided to lessen potential damage to brain cells.
One day we'll wake up from this nightmare.

A1 Where Do Babies Come From? (North Wales)
A2 Who Wants To Be A Millionaire? (Children Of 'Top People')
A3 Ambition (The East End Of London)
A4 School Life (Newcastle)
A5 Life In Hospital (Leeds)
A6 The World Of Grown-ups (Manchester)
A7 Weddings (Nottingham)
A8 Running The Home (Sunderland)
B1 The Royal Family (Northern Ireland)
B2 God And The Bible (Crawley)
B3 What Would You Like To Be? (Manchester)
B4 Dreams (Liverpool)
B5 Getting Into Trouble (Burnley)
B6 Christmas Nativity Play (Sunderland)

DOWNLOAD the sound of president trumps mind HERE!
Posted by Jonny Zchivago at 20:48

Now if we could only find out where Aphex Twin's "the flowers that bloom in the warmth of the sun" sample came from ....

Radiophonic-Doctor Who sound worlds are hard wired into my synapses, these posts have been most welcome. Any chance you've got any of Tristram Cary's work, especially electronic? Personally I was enjoying the ladies too, Inventions for Radio fuck yeah!! But I've had quite strange listening experiences, in that I live in Oakland, California - part that weird void in between Canada and Mexico - and so I've been listening to all these recordings with the persistent sound of helicopters hovering over the city, squads of police cars tearing through the streets, fireworks randomly exploding above neighborhoods, pretty stunning level of general mayhem at times. I'm a grizzled semi-old guy, but this has been really extreme (justified protest in my view). And experiencing the country teeter right on the edge of outright police state dictatorship is eerie to say the least - yes indeed, the dreams made manifest of the psychotic little potato in the white house. Apologies world, sincerely. This country has carried virulent strains of murderous fanaticism since it was first colonized, and that murderous nature is really coming home to roost. Ok, that's maybe more of a rant than I intended. And I smoked some of that notorious legal weed a while ago so hopefully I didn't write anything too stoner-brained. Thank you for the music-noise, I'll have a better listen later, fingers fckn crossed.

@ Neolithic Mind.... yeah you have predicted the appearance of Tristam Cary's work on and off Doctor Who.
Your listening experience could in fact be turned into a dark ambient album.
Perfect conditions to do a version of Cages's 4:33
Apologies accepted, Here in France we've had constant rioting and Police violence for about a year, taking a break for the pandemic...oh yeah, there's a pandemic by the way...forgot about that.
I'm not one to encourage violence but an angry mob should take the losses and storm the whitehouse, snatch the orange one from his bunker, and lynch the fucker, mussolini style.

"storm the whitehouse, snatch the orange one from his bunker, and lynch the fucker, mussolini style." It is to dream.

Thanks for this and all the Radiophonic Workshop (and related) that you have posted. It's gems like this which make my day.
Best wishes Jonny.

This is just wonderful. Thank you so much!