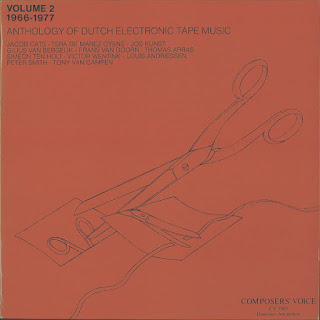 They have funny names, wear clogs, take drugs openly,ride bicycles,have childrens stories about putting fingers into Dykes...and if that wasn't enough to recommend that you move to Holland, then how's about all this early electronic music then?
They're so liberal over there that all of this was probably state-funded. If the government did that in the USA the Rednecks would start lynchin' people of colour again,if they ever stopped?
There's something about all this early electronica that is far more disturbing that it's younger,trendier, sibling Industrial Music,which tried far too hard to be unsettling.This is the same as the difference between those scary movies where you saw nothing except what your own mind imagined,and shit yourself.Industrial Music was more like a Slasher move where nothing was left to the imagination. The human mind is capable of indescribable horrors,and this musique concrete stuff gives the mind the space it needs to create the terror of real life,or rather reveal the terror of real life.
Fucking Hell, we're all gonna die!?Why wasn't I TOLD!!!?

DOWNLOAD with lashings of chocolate sprinkles HERE!
Posted by Jonny Zchivago at 09:31

Dear Anonymous...you'll get me thrown out of the Labour Party with talk like that! I'll have to say that quote is 100% mythical.

Thanks a ton! Nice to see a piece by Andriessen. Amazing stuff all.

And, yeah, liberal guys indeed. This might serve as a soundtrack for same. I grew up in the late sixties and heard some horror stories from old folks about the extremely liberal european countries of Netherlands, Denmark and Sweden. The dutch were the worst, with smoking joints for breakfast, every second house being a brothel and lots of satanist temples that offered children to Moloch. "Never move to the Netherlands!".

It's just that all who did so, against advice, had a completely different and better story to tell.