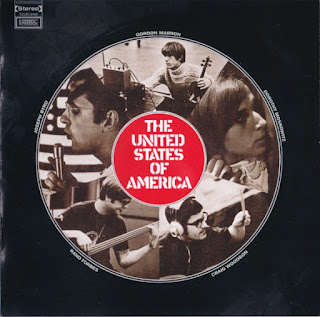 Another group vying to be the first electronic rock group was the ironically monikered, United States Of America.
Their name was of course an provocation—“a way of expressing disdain for governmental policy. It was like hanging the flag upside down,” as the group’s Dorothy Moskowitz explained.The United States of America somehow sounded like a counterculture state-of-the-union address. Their debut album was the work of a group of UCLA students working under the direction of Joseph Byrd,a former student of John Cage,and ,the irony doesn't stop with the group name,a card-carrying Communist (well done you're in the club!?).He envisaged an avant-garde rock band with radical politics at its center, the Psychedelic Crass, and from that combustible starting point came a suite of music that pulls in all directions. Psych-rock and musique concrète leaks into trad jazz and ragtime,a much parodied Psychedelic era genre,and more evidence that Pysch Humour,alongside anyone who is 'stoned' just isn't funny,but with Moskowitz’s beautiful but effectless voice soothing the irritation somewhat.
Never play Ragtime or Dixieland jazz...EVER!

DOWNLOAD the united states of electronica HERE!
Posted by Jonny Zchivago at 20:27

Byrd is arguably best known for, when the major labels launched their legal and PR battles against Napster et al, testifying in court that Columbia had kept his LP in their catalog for decades, and never sent him a royalty statement.

My absolute favorite work of his is the arrangement of "Crucifixion" on Phil Ochs' Pleasures of the Harbor-- electric harpsichord, full orchestra, synthesizer and, at the song's climax, tape manipulation. All of which so terrified Ochs' audience that when the obligatory CD box set came out, the version used of this song was a proper folkie live performance with his own guitar accompaniment.

Great album with that lovely "The Garden Of Earthly Delights", covered by Snakefinger!

I hope this is not too off-topic: Do you know The Secret Society Of The Sonic Six? I think they are absolutely outstanding and something to discover. Most of their stuff is available at Bandcamp. I find it amazing how creative this couple are, given the fact that almost any musical territory in electronics seems to be explored. Sometimes they remind of early Cabaret Voltaire, sometimes of Chrome or mid-phase Ministry, but all in all I find nothing they could be compared with. What do you think?

@ mandolinny: I had no idea that Byrd had worked on that Phil Ochs' piece. Makes sense, in retrospect.

Dorothy Moskowitz has claimed that Nico had really wanted to be a part of The United States of America. Could have been interesting, but I always got the sense that Byrd was one of those who obsess over being off by a fraction of a cent, and perfect pitch wasn't one of Nico's strengths.

Also, I wonder who made the executive decision to go with Byrd's vocals on "Wooden Wife"--what were they thinking?