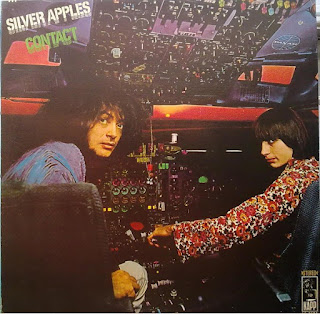 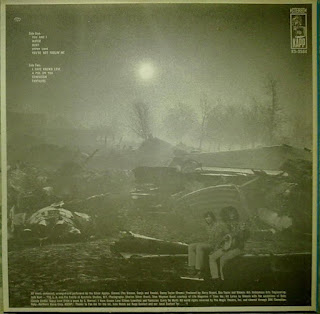 The Silver Apples' second album caused a bit of a hoo-haa,and is another fine example of what happens when capitalism becomes involved in music.
Our most favourite eclectic NYC-based 1960s minimalist electronic pop duo had struck a deal with the now thankfully defunct airline Pan Am to shoot the front photo of the album's artwork in an airliner cockpit, in exchange for including the Pan Am logo. However, the backside of the record featured a photograph of a plane crash. This led to a lawsuit and the record was pulled from the stores,effectively destroying their career. As if seeing our Silver Appled heroes pickin' banjoes in the wreckage of a plane crash would put anybody off flying with Pan-Am, or the chances of anyone but a few penniless hippies actually seeing this image,would send the airline's stocks tumbling was extremely unlikely.They sued because they could.If these big business idiots had any sense, they would have laughed it off, and added an American Airlines logo on the wreckage on the rear.This would have boosted Pan-Am's public image, and even helped American Airlines as there's no such thing as Bad publicity, sayeth the man, and The Silver Apples would have made the Billboard charts; thus making them suck,but at least they'd have finished the third album,and likely made a fourth. I asked Simeon why he didn't release the previously mythical third album (which eventually saw light in 1998-ish), and he said, "It was too commercial", so Pan-Am missed out there....probably why the fuckers went to the wall.A Pox on you and all your houses big business man.
The album itself, is a droning eardrum buzz groove of classic hippie electronica,and is certainly the superior work of their first career.Dare I say Groundbreaking?....like a falling aircraft?

Back in 1993 me and my mates started up a band, striving to be different from the usual 'alternative' fodder that was about. We consisted of a singer, bassist, oscillator (nicknamed The Monster due to it being so damn unpredictable/uncontrollable) and a drummer who could drum like the drummer from Can (great as it sounds it was the only rhythm he knew which he could play uninterrupted for hours on end). We had no guitarist and we liked it that way. One night whilst practicing in a cellar of an Afro-Caribbean hairdressers the owner came down to listen. He puffed away on his spliff and nodded along as we played. When all was quite he asked if we had ever heard of the Silver Apples, making a comparison to our sound. We all said no and he recommended that we go listen to them straight away. Naturally we made it a point and a friend did us a tape of the first two albums. We loved it. We convinced ourselves we would be the new Silver Apples. We were very excited and rehearsals became intense. Nothing ever came of it of course, other than a few recorded sessions in that cellar. Nonetheless it was a fun and creative time for us and still today I listen to the Silver Apples. Pointless reminiscing over...

i want to like it but i can't get past the vocals.

I See Sea said... "a drummer who could drum like the drummer from Can (great as it sounds it was the only rhythm he knew which he could play uninterrupted for hours on end"

Surely you meant to say Klaus Dinger there. Because a) that's what he could do (play only one rhythm), and b) no way no how could your friend play like Jaki Liebezeit. Which is not a slight on your friend, mind you. 'Cause that's a big, big club.

so how about that third mystery lp? is you gotsit?

Off topic - but you might find some of this interesting. Detroit Mi DIY Tape (some Album) content form 80's 90's -https://cult-of-decay.blogspot.com/2020/05/blog-post.html