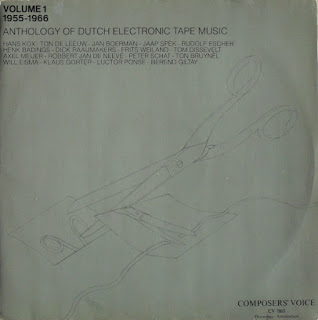 On a purely Intellectual note to start off with......TeeHeeHeeeee......His name is Hans Kox...titter titter! Fnar Fnar Kyuk Kyuk!
Well, Hans off yer Kox now,and lets get serious.....Nah!
Like everywhere else,the Dutch think they invented Electronic music,and one has to say,they were pretty close to having a point.
The origin of Electronic music is almost as tiresome an argument as who invented Punk Rock.....but in Punk Rocks' case it was quite clearly England, Not Detroit,Not New York,Not Scotland...England,gottit?
As for coherent electronic composition, it seems,on the whole, to be a French thing, although it turns out that Daphne Oram of the BBC may have trumped Pierre Shaeffer,but it was kept traditionally  Hush Hush in that understated British way.We don't like show-offs over there  y'know?
One thing that the Dutch are world class at however, is Funny Names.

DOWNLOAD some early electronics with clogs on HERE!
Posted by Jonny Zchivago at 12:06

He guy, i have to point out that John cage was very erly in the game since he made a piece for sinus tones played from turntables already at the end of the 30 ties and an Egyptian named Halim El Dabh made an electronic recording on a wire recorder in 1944, so he is early then both Daphne or Pierre...
Cheers

Never understood why the discussion over the origins of electronic music always had to be an argument of sorts. I mean, the Telharmonium predates all this stuff by nearly a half century, but it doesn't count (apparently) because it's merely electrically _powered_, and not electronic proper (in fact, it predates electronics proper). And what of the many varieties of tonewheel organs? Again, electrical but _not_ electronic. But even there, proper electronic organs were pretty early on the scene--and for anyone who likes to obsess over the particularities of the circuitry, Richard H. Dorf's _Electronic Musical Instruments_ (though really just organs) is a masterpiece. For most people I suspect it'd be a pretty boring and/or incomprehensible read, but if schematics from the pre-transistor (and early transistor, starting with 2nd or 3rd edition I think) age are your thing, well...

It's an argument because whoever was first and whoever is right about who was first,
both get that free iphone you always hear about but never see.

Hans Cox? sure, but Luctor Ponse is the dirtiest, with Jaap Spek
a close second. Don't "metoo" me!

@northfieldhat....i did cast a sideways glance in the direction of Luctor Ponse....and considered highlighting Peter Schat...but I was too scared this may attract harsh criticism from a casual Antifa member in his lunch hour.

@ northfieldhat: I thought you got those phones for voting for Obama or something?