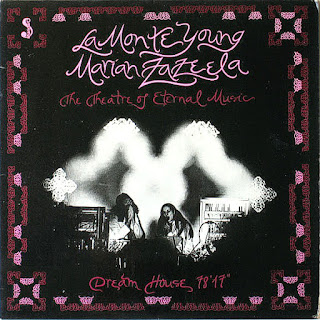 You want more don't you?
Here we have the mongolian style drone singing of the La Monte Young husband and wife team,with John Hassell joining in the fun on what sounds uncannily like a Kazoo?But i'm reliably informed that it was a trumpet?.....yeah right? I'm not as stupid as I sound,it's a Kazoo!
So technology existed in 1974 that could cram 80 minutes of drone on two sides of one vinyl 12 incher,which makes it all sound even shitter quality,and is rather crackly;which adds to its charm and not only gets rid of the normals from your personal space, but the audiophiles too. Its a win/win situation.
Again we have instructions on how to play your record....thanks 'La':
"For the maximum fidelity on Side B, reduce the treble controls on your pre-amplifier to minimum. Since the sine waves have no harmonic content, and all are below 202.5 Hertz, this will reduce the surface noise which is normal on most discs. Note: Be sure to keep the treble controls normal on Side A."
I did all that and it still sounds shit,but being a fan of Shit-fi I mind not.
So now you know what you've been doing previously is WRONG!...which is not too much of a pity because the Audiophiles have now left the room.....FOR GOOD!
Now, if you haven't been patronized enough here's an explanation, from 'La' to you:
"Side A. 13 I 73 5:35 - 6:14:03 PM NYC is a sub-section of Map Of 49's Dream The Two Systems Of Eleven Sets Of Galactic Intervals Ornamental Lightyears Tracery, begun in 1966 as a section of the even longer work: The Tortoise, His Dreams And Journeys which was begun in 1964 with The Theatre Of Eternal Music. Performed 17 January 1973 at La Monte Young's private studio."

Is that a misprint? I thought side B is "Grift Study".

Probably not the first to take La to task over this but... OK, sine waves have no harmonic content, but, you're playing in a freakin room, ja? (Unless you're one of those wankers who runs everything with a plug direct to the machine) And it's kind of a resonant room, so... leave the treble where it's at. Also, you call it "drift study" but then you tell us some guy made these especially _stable_ oscillators _just for you_. Are you trying to prove that his oscillators are crap or something? Just seems kinda shitty.

And, yeah, Laswell played in Curlew--but only occasionally, and I think he was still makng an effort back then.

Art-Club Rule number three...EXPLAIN YOUR WORK TO THE POINT NO ONE CARES

Art-Club Rule number four....EXPLAIN YOUR WORK TO THE POINT THE EXPLANATION IS MORE ANNOYING THAN THE WORK ITSELF.

In glorious shit-fi as well. perfect.

They spent all their money on hyper-stable oscillators. Nothing leftover for good microphones and a stable tape recorder.

And another thing about La... He studied with Pandit Pran Nath, has a lifelong fascination with Indian classical music and such--did no one ever tell him what that bit of thread under the bridge of his tanbura was for? Or why the bridge is shaped all funny-like? Or introduce him to the notion of javari? It's all about producing the desired overtones, man--and he's playing around with freakin SINE waves?!! I can't imagine someone like Tony Conrad saying, "I wish I could get my viola to produce something closer to a sine wave."

I'd say that La is fucking with us, but for the fact that he invested (and continues to invest... eternally, apparently) considerable time and energies into various sine wave "studies." Or perhaps it's a long con? (like in that episode of Lost, where I learned all about "long cons."). He shoulda left the sine waves and tanburas to the experts and gone back to his Bosendorfer.

Rabbit rabbit rabbit rabbit rabbit. You got schhhtyle. Christ, where have these guys been for my entire life? Surely they must have collaborated with Tony Banks at some point during their storied careers--I simply can not imagine that NOT happening.

Indeed, Chas Hodges has worked with everyone from, Gene Vincent to Joe Meek, To, probably, Tony Banks.....basically Fuck the 'Well Tuned Piano', a Bosendorfer was made for a tune like "Gertcha".....

ps I own few t-shirts with bands on them, I have a Slaughter and The Dogs tee,a Van Der Graff Generator, and...yep...Chas'n'Dave "Rabbit"...I feel that covers all that ever mattered in Rock'n'Roll?

This one has been reissued, does that mean it's ok for latecomers to hear? I've got an original copy which I bought in 1990.

A VdGG t-shirt?!? Don't see many of those turning up.

Pandit Pran Nath lived with La and Marian at their "foundation" headquarters, and was always after beer and young skirt. Maybe he was Rock 'n' Roll...

Actually both these albums are black

I just completed a ten month odyssey down the abyss of the DIE or DIY archives. I felt that I had a wide grasp of outsider and DIY music previously, but this here blog has blown my socks clean off.

Much continued success to you and this blog going forward.

@ Mr P... congratulations on your odyssey.....Perseus and Jason with his Argonauts all tried and failed to cope with wading through Die Or DIY?..to the point where i had to release The Kracken...so you're one up on them...watch out for the Medusa of Pop,don't look her in the eyes or you will be turned to Rock music.

Is this the same chap who was behind Disco Tex and the Sex-O-Lettes? It's quite a change in direction from Get Dancin'.

Hey parmalee, sometimes it helps to be a little LESS ignorant.The Drift in "Drift Study" requires stable sine waves, otherwise you will not hear the effect! LaMonte Young was exploring, the drifting experience you have when 3 steady tones with the right ratio to each other are impssed on each other.Then the steady tones are becoming more alive , floating and drifting and beating.It's his variant of what other early Minimalists were exploring with phase shiffting i suppose.By the way-I am mad enough to use my lockdown time to get rid of cracling and other noises by using audio software, which takes hours or days, but i enjoy it, it's my version of computer gaming, which i don't like at all!

@ Bodhi Amol.....that there's fightin' talk!....I suspect that Parmalee is substantially less ignorant than you imagine,maybe even less than your own oviously superior mind.
Anyway this blog is built on Ignorance.....and damn proud of it too.

@ Anonymous.....I wondered who would spot that....sure its Disco Tex himself...didn't you hear the stable sine wave on "Get Dancin'"????
The Sex-o-lettes provide the out of phase vocalising on this one.

Well fuck there goes most concept and conceptual art!

There goes most of 21st century music from experimental to pop!

If artists wanna be writers why don't they just do that!

*When conceptual art was still concept art it was novel & fun then fuck me it's dragging on to this very day!

Its also art Club Rule number 2 of course.
Silence is one of thee most creative art forms..sadly most artists have self-esteem problems and wanna show dat dey is brainy 'cus they feel dumb inside..
Always liked the line "I don't Give Interviews"...if the public wanna understand it all they can work it out for themselves can't they....they like those Whodunnit series on netflix don't they?