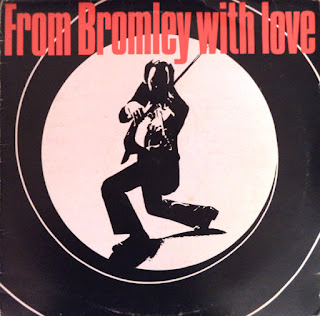 Up north from the south coast to Sarf London,and the London Borough of Bromley.....yes, that Bromley, where the horrendous 'Bromley Contingent' came from.
For those of you who didn't know, the so-called Bromley Contingent were a bunch of spoilt brats from suburban London who followed the Sex Pistols because they were the nearest they could get to following David Bowie about.This Pistols entourage contained such punk rock photo opportunites as Billy Idol, Siouxsie Sioux, Jordan, Soo Catwoman, and other such middle class artschool dropouts.I think they enjoyed the early exclusivness of the early Punk scene rather than the groups and art aspects,so as soon as it became marginally more popular they melted away,moaning about how it had all been ruined.....which to some extent it had,as their favourite pop Group was handed over to us 'Outsiders'. Some of this entourage were seen on that toe-curling interview with Bill Grundy and The Pistols........jeeez,times were different then.........Now come on what was the rude word?........."Shit" answered that naughty schoolboy Johnny Rotten sinking into his seat with awkwardness.......this caused an outrage which i'm sure you're all extremly bored with.Very silly stuff.
Four years or so after the Grundy debacle, the remaining residents of Bromley produced one of those Local Band compilations, that on the whole sounds as if 'Punk'had never happened.
It seems everyone in Bromley decided to buy a synthesizer, or become Classix Nouveaux or The Cure.There's a definite 'Futurist' vibe, with ambitions to hang out at 'The Blitz' with Spandau Ballet,which stinks of the former Bromley Contingents raison d'etre.
There's a couple of decent Power Pop tunes, a couple of Adult orientated Rock numbers (awful),and the odd decent Post-Punk ditty. The stand out tune is one by The Locusts, called "Lost fight", which seems to have a singer/shouter who seems not to be listening to the backing track;a technique I always admire.
As an album,this patchy compilation deserves a prize for managing to squeeze 18 tracks on 12 inches of black vinyl.So the sound quality is not of the highest standard,but hey....value for money is always desirable isn't it?

DOWNLOAD from die or diy? with love HERE!
Posted by Jonny Zchivago at 11:51

thank you!! I have this on vinyl, but no way to play it and I want to hear just how bad the track I was on is....haha!

My pleasure.
Report back as to your experiences upon reliving this cringy moment in your life. And tell us which track you're on too so we know what you did!

I remember Hepatitis Risk. Their best bits were a version of The Magic Roundabout theme that got faster and faster. The singer used to wear just long john bottoms and throw himself around, his girlfriend was the backing singer. She wore a really smart, chic two piece suit and pill box hat. She would look down her nose and sneer at him as he went bonkers. I found it a really funny visual counter point.

Cheers for setting up the blog and making the album available. Bit of a long message coming up, excuse me! I wrote Only Dreaming and Dresden, first one for a friend who sang on it and her proud dad, gregarious and very friendly to all of her friends,gave me all sorts of contacts of A & R people in EMI, Cherry Red Records, RCA etc. for me to lug around the record and play it them. I was pretty green and not focused on business, though the person who I was working with on ALTERNATIVE fanzine, a good mate, created ALTERNATIVE RECORDS and arranged all the bands to be on the album. I was good friends with Jerome who played guitar in PRAXIS. Okay, so with ONLY DREAMING, I had my band HO HO play bass, keyboards and I played guitar and did a few vocals with Gloria (the singer on ONLY DREAMING) The number DRESDEN. Mark who was running ALTERNATIVE RECORDS (the friend I mentioned before) I notice I use the word 'friend' a lot here. Must be the LOCKDOWN where we have a chance to connect, his friend doing promo for ALTERNATIVE had a brother really into NEW MODEL ARMY (before Gary Numan went solo) Saw his gig and was asked to produce...............Wrote the song as an homage to the fledgling Gary Numan, Terry (his brother) liked and again with this case got my band (HO HO) to play...........Enough, already! Anyone who reads this and were around and/or were on the album, would be great to hear from you, Stephen Deg

PRIVATE MESSAGE : So gathering from your review I feel a certain emotional mixed feelings. Were you on the album or did Mark not put you on it. I am not being facetious, just bemused! I like you band's sound which is at odds with how you described those of us ''everyone in Bromley decided to buy a synth...etc.'' Going to Studio 21, The Kit Kat Club, guilty as charged yet those places were frequented not just by spoilt middle-class kids. Would love to have a chat via e mail or something. Quite surprised when I discovered that some scratchy vinyl copy of the record was being marketed and sold around Europe to this day. Mark, who I referred to in my comment, which you need not share :) found that out while we chatting him in Thailand, me in Tokyo and laughed ''Bastards'' You have my gmail, so write to me, all right! Stephen Deg

Ah, what a blast from the past. I co-wrote and played guitar on the tracks by Ekofisque and I'm still in touch with the far-flung band members almost 40 years later. No so much of the spoilt kids though, please! I spent more than a month's wages on the guitar used on these tracks which I still have and still play! Still only worth a month's wages, if that, though...

Indeed Clive.....the spoilt brats part was about the bromley contingent....couldn't stand the sight of them.....loved the Banshees' first two albums though...had something to do with Morris and McKay one thinks,as the following albums were shite.
I take it you've seen the above comments from one of your fellow FBWL contributers?

I used to go out with the bassist from The Locusts. Not much of a claim to fame but there you go. LOL

I can safely state she was female. It was a deal breaker because I've always been straight :)

I loved the Locusts, they really bashed out those tunes live. I also remember the Contacts who played "Teenage Kicks" live so fast the song was done in less than a minute - good though!

Thank you. Can't wait to play this out.