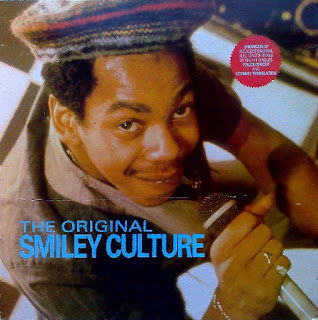 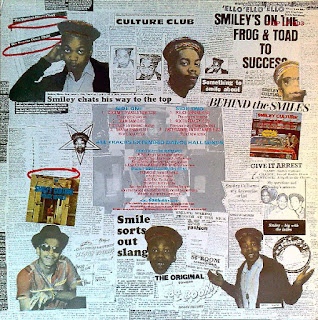 America had Patti Smith and the Sugarhill gang, or was that the Anthill Mob, I dunno....in fact i don't care, because the Uk Had Smiley Culture at the year zero of the 'not being able to sing' movement.
Oh christ, we had Linton 'Boring Bastard' Kwesi Johnson, and his offspring, Michael Smith....the one that got murdered....and the one that didn't get murdered....Benjamin Zephaniah. Not entertaining,and a rather too serious.
Of course the Irony was that Smiley, that loveable rogue who brought blacks and whites together efortlessly,who incidently are both people of colour ,cus if they weren't they would be invisible would they not?...oh yeah, the Irony,the Irony....the Irony was that the toaster/rapper/ranter of novelty Hit "Police Officer" was believed to have died of a single stab wound during a visit by the Metropolitan Police to his home in march 2011?...whom weilded said knife it is not clear;but smiley smiled no more.
But he did bequeth a selection of very entertaining tunes that light-heartedly disected life in Britain for everyone in 1986.
"Cockney translator" and "Police Officer" are classics that LKJ could only dream of.
These are the dancehall mixes of his best tunes,and correctly, he never really made any others.This is Pop!

DOWNLOAD this life translator HERE!
Posted by Jonny Zchivago at 09:29

You definitely seem to dislike black culture and black people. It is unfortunately an ongoing theme of this blog. What is your problem, twat? Do you somehow think it is acceptable to go online and indulge in a bit of 'jokey' racism? Nothing too vitriolic, so no real harm done. Is that the way racist twats like yourself imagine they can get away with giving their bigoted views an airing, with a veneer of so-called humour? Why not come out and unequivocally say what you mean, prick? Although it is pretty clear what poisonous attitudes are fuelling your nasty quips. Linton Kwesi Johnson has achieved far more in his life than you can fucking dream of, bonehead. He is a genuine force for good in the world. So shut the fuck up about things you obviously do not understand, ie. black culture, black struggle and black people.

Oh very erudite,and predictable,aka The real racist speaks....there's always one......oh alright I like Benjamin Zephaniah after all,just don't be nasty to me pleeeeze. Yes i admit i'm not a great as LKJ just don't call me a bonehead again ,it hurts. 'Cus i don't like reggae makes me a racist.I think you'll find plenty black culture on here that i do like a lot.
I bet you're an expert on black culture, black struggle and black people aren't you, 'cus you once bought a Bob Marley record from woolies?
I slag off everyone equally,as you may not have noticed?

where do these fukwits come from mate?

@pistoff ...Careful mate, or the white non-racist racists will com and get ya!
Fukwits come from all kinds of places...this one i suggest is a white american trump voter from Maryland,or somewhere similar. Just witing for his thesis on 'the Black Struggle' that he seems to be claiming superior knowledge of.
The bait was dangled and the dumbest fish bit.

Pathetic reply, mate. Would you make such disparaging comments about black artists to a room full of black people? I rather think you would not because you would know you were being offensive and might get your skull cracked.

OH cHRIST!...which disparaging remarks are these then?....i don't think you can find anything that couldn't be said in a room full of black people,you obviously don't know any.. I think they'd have more of a problem with the likes of you.They can fight their own battles without your...er...pathetic attempt at appearing as right-on as you aren't. Its Super whiteman to the rescue!
One is not a racist because one don't like the music of someone who happens to be black.I was even reasonably nice about BZ and especially Smiley Culture ffs.Go away you are impressing nobody,and making yourself look rather silly.
Note lack of expletives and cheap inarticulate insults....this is not a denial by the way,you're just looking in the very wrong place.

@ Nick....ahaaa, this gentleman and scholar has read the posts without prejudice. But at the Risk of giving myself enough rope to hang myself, I will bravely say that to approach the nearest anyone can get to being 100% non-racist...i prefer the word prejudiced,as used earlier...one must admit that you have felt some kind of prejudiced emotional responses in your past or present.Like an alcoholic has to admit to being so in order to cure his affliction. Its a darwinist tribal response,we all get it,and you don't have to act upon it.We are allegedly an intelligent species,and are capable of bypassing these bestial emotions.....I don't really have to explain myself to Ali G up there,but just in case i have another stalker i feel i should define my understanding of what is or isn't racism or prejudice.
All you'll find on here is Honesty.

Thanks for your appreciation Nick.Cheers.