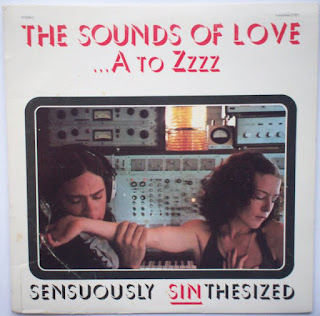 It sounds like Fred isn't entirely concentrating on pleazin' his woman. Fiddling around with his electronic organ,and twiddling the wrong knobs when he should be giving her his full attention. What's more he seems to have shoved a microphone in her mouth, without a windshield, to record her half-hearted ecstacy. Not any wonder that this run through of the orgasm alphabet ends with a Zzzzzzzz.
Another downpoint is the version of "Bolero", which always brings me a horrific flashback of the winter Olympics in 1984 when Torvill and Dean won Gold in the Ice Dance with that terrible, traumatizing medal winning routine. Granted, I would have preferred Fred Miller's version to have pumped out of the speaker system,complete with the moans and groans of sexual monotony.
Yes, women do it better......no not sexual intercourse, I mean messing about with electronic toys....they being, synthesizers. So that segués us nicely from all this semi-erotic nonsense into the stone age of electronica, when women ruled the Earth!?

DOWNLOAD ahhhh to oooohhhhh HERE!
Posted by Jonny Zchivago at 14:11

If that's a teaser for an upcoming wave of women synth wizards, then go team. However, the only ones I can think of that would be of the "hottie" variety would be Ciani and Spiegel. Pauline Oliveros...not so much. Perhaps hers could be supplemented with a recording of someone reading Gertrude Stein's "Lifting Belly".

My, but I'm a pretentious, name-dropping, snobby, full of myself, misogynistic fucktard today.

Yeah Ciani and Spiegel...that french one was decent, Radigue was the name..and that italian one called Doris Norton.....of course i'm judging them on the music !?
Fear not, i've been accused of all those aspects that you see in yourself...its completely 'Normal'

i just love this lp.........it's more of a very weird synth lp...one of my prize possessions! I'm sure you're aware of "New Music For Electronic And Recorded Media"....stupidly all wimmings, but very good none the less. https://www.discogs.com/Various-New-Music-For-Electronic-And-Recorded-Media/release/355412

Good grief, every song here clocks-in better than I do.

It's funny to me how many synth nerds are frothing over early Suzanne Ciani records. Don't get me wrong, they're very good. But have you heard her 80s output? That shit is Tesh-tastic (see John Tesh, if you're a young 'un). I don't begrudge anyone cashing in on New Age bullshit -- it's what made America great ever since the Snake Oil days (weirdly, we are revisiting those days now). But, in retrospect, we now know that it was possible to make non-turgid New Age records back in the day. The 80s Ciani stuff has aged as well as a Constance Demby cello patch.

Also, I got to see Oliveros perform "Horse Sings From Cloud" in a dingy North Beach gallery shortly before she died. It was better than sex. People were getting flushed and were writhing in their seats. Or maybe it was the "Furry" art exhibited on the walls. Anyway, I won't tolerate cracks about her octogenarian good looks.

Fred Miller on Yorkshire Records sounds as if it should be some chap from Sheffield or Barnsley giving us a lecture on the facts of life.

Fred miller tells us about "putting them Rubber Johnnies on t'penis like!"

How does one engage with Oliveros' octogenarian crack? Well you just get right on down in there and do some DEEP LISTENING, of course.

LOL!..this blog is going down hill fast.....i take the blame.

You folks make me proud to be an American. An experience I haven't had since Daphne Oram did sexy lesbian stuff with Delia Derbyshire. If any Americans are reading: That's hilarious because they are both accomplished pioneers in electronic music and are also - wait for it - women! Y'know, like the bloke that did "Switched on Bach"! Americans love their only one joke.

OK, now I feel bad because the next post is Ruth White, which is legitimately amazing.

Jonny, not so much downhill as caressing the perineum of a sleeping family member. Clearly the only way is up ... up where and up what is the only concern.

However, nothing can sink so low as to make an American proud to be an American. I reckon it's really Jared Kushner (his initials are SS after all ... just saying) trying to make the world believe that Americans have a joke that's funny!

Fear not, my low standards are on the up...oooerr missus.....but feel assured they will plummet the second i get bored. I'm a simple man.