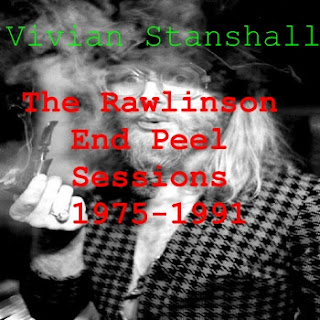 Not had enough of the saga of Rawlinson end yet? Well here's another three and three quater hours of this lysergic aristocratic soap opera.There's a refreshing lack of political correctness,plenty of references to 'Jungle Bunnies' and 'sambo',made(especially in the film version one noticed),historically correctly I may add, by Sir Henry.Like a hybrid of 'Downton Abbey' and 'Love Thy Neighbour'* on Blue Sunshine.
I love the casual anti-semetism of 'Christmas at Rawlinson End part one' otherwise entitled "Cannabalism at the Syna-gogo...or 'you can have your Kike and eat it". Which is as 'English as Tuppence'.
If broadcast today Vivian's classic work would have been redacted into obilvion. Like I think most of Enid Blytons work has been.We can't forget that these attitudes existed,and revise the history of the British Empire,even though it is now generally portrayed as an evil exercise in conquest,murder and theft.
Sir Henry at Rawlinson end, although a surreal comedy in essence,more accurately portrays the character of pre-war England than any history book.For me,this,contrarily speaking,is a piece of classic,but funny, Non-Fiction,like the Bible is a classic piece of hilariously unlikely Fiction.
And don't forget no-one was more exploited by the British Empire and its class system than the English themselves.Like Germans under the Nazi Regime.
The biggest crime of the British,French and German Empires was sending millions of innocent English, Germans and French to certain death in the, so-called, 'Great War'!..to defend the gentlemens honor of the opposing empires,and protect the vast riches of the top 0.25%.An un acknowledged and unpunished Genocide.
But you've gotta laugh ain't cha? There's also a great charm about English life, that is also greatly evident in this fantastic, endless monologue.It does make one nostalgic for the olden daze,while at the same time glad you didn't live in them.

Sorry to associate this superior work of english literature, worthy of P.G.Woodhouse himself, with grubby racism issues,but i gotta write about something ain't I....if you want a more straight forward analysis,google it......after all I have been labelled as a 'Racist' so i better not disappoint the clueless finger pointers that plague progress.Maybe Covid will do for them...please!

(*)a controversial British,allegedly 'Racist' TV sit-com that is now banned...but not on YouTube I may add. As far as i'm concerned, as unfunny as it is, its an accurate recreation of real life in 1975,and brought these issues out in the open.All the black actors in it agree...there were millions of 'Eddies' in the seventies...now they exist only in their handfulls.There will be nay-sayers of course, but it has changed enormously since then...although there are some who want to keep it alive on both sides of the racial tightrope.

DOWNLOAD the crackpot from the end of the rainbow HERE!
Posted by Jonny Zchivago at 14:00

Sir Vivian was a truly great British eccentric, and the Peel sessions are probably his finest hour. Great, warped genius. Thank you for posting these wonderful relics!

Thanks a billion for posting this - not heard since original broadcast

Thank you Jonny, I've had a few of these on cassette for years, but some I've never heard before, great stuff.

Thank you for keeping this alive, although seeming racist it is as you mention a parady of the relevante humour of the times. Even Sir Lenny Henry regulary appeared on the black and white minstral show as swimming against the tide got you no work.

i could risk a woke backlash, but isn't Lenny Henry a fine example of a white man's kind of black man?...as well as being stereo-typically NOT funny in the white men can't jump side of things?
I used to hate the Black and White Minstrel show....mainly because it was utter shite rather than racist.